Fried chicken, a beloved staple of home cooking, gets a new showplace in a Dallas restaurant brought to life by the family behind the Black-Eyed Pea.

Southern home-style favorites reign supreme at Street’s Fine Chicken, but with more attention to craft and from-scratch preparation than the popular chain that Gene helped start.

“A Southern chicken concept in Dallas has been a vision in my family for as long as I can remember,” said Marco. “The property is owned by the family, and we feel that its central location and close proximity to Uptown and Highland Park will pay off.”

With the new vision came some new decor. No longer is the space dark and a bit clubby-feeling. Walls are bright and accented by old-timey portraits of chickens on one side and splatter paintings on the other, a nod to Marco Street’s love of art. A bar situated near the entrance seems a delightful place to sit and sip a bit.

The main culinary focus at Street’s is brined local chicken tossed in French provincial herbs and spices and fried to golden-exterior perfection; the bird also comes in tender and chicken sandwich form.

A peri peri version sees the chicken brined in a house-made hot pepper sauce before it’s grilled and served with sides or stuffed into the Sin Killin’ Thigh Sandwich. Chicken even forms the basis of an instantly-popular starter, the smoked and fried Chicken Lollipops.

“Together as a family, we’ve developed a concept focused on serving the best locally-sourced chicken in many delicious ways,” Marco says.

To that end, the Streets largely succeed. A recent dinner visit started off swimmingly with panko-crusted pimiento cheese fritters set in a Tabasco-agave jam. The slight heat of the melty cheese filling and the sweet sauce played off each other nicely.

Fried chicken arrived wonderfully brown and crisp outside and juicy inside. However, while some pieces were piping-hot, several were lukewarm. The meat could have benefited from a touch of salt, too. Dotting it with Sin Killer hot sauce, however, pepped things up nicely.

The mac n’ cheese, oozing with melted Brie and smoked Gouda, was comfort food heaven. A side of maple-roasted Brussels sprouts with crispy bacon boasted great flavor but none of the promised bacon. Roasted & Toasted Chicken puts the French herb rub at center stage and tasted homey and upscale at the same time. Skin-on fries were simple and addictive.

Street’s drink menu is short and sweet, with popular beers and a couple of craft choices on hand. House wines will set you back only $5, though there are additional selections as well. Handcrafted cocktails make use of expert combinations of fruit, herbs, and spirits. All are perfect for toasting this space’s family-led renaissance with hopes for its continued growth.

“This is the neighborhood that Gene Street got his start and where he had a lot of his first success,” Marco Street said. “Over the next several years, we plan to do four or five family-owned and -operated stores in DFW, and hopefully move to franchising beyond that. We have our eye on the second location already.” 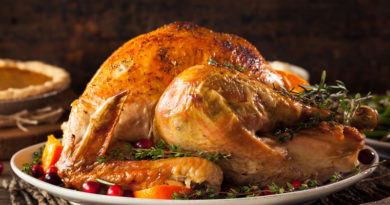 Five Ways to Enjoy Thanksgiving On The Go