In 1955, a group of Highland Park moms set the stage for adolescents to produce theater “for children, by children.”

More than 60 years later, Junior Players has evolved into a much bigger project that has fostered the creative aspirations of more than 7,000 children across North Texas. The organization works closely with Dallas ISD and other school districts to get children involved in the arts through free after-school and summer workshops in drama, dance, music, media, and art.

Since the organization’s founding, it has developed more than 100 free programs for kids in kindergarten through 12th grade.

Part of the group’s legacy includes its annual Shakespeare productions, whose renditions always incorporate a twist.

In keeping with that theme, the group’s modern-day production of The Taming of the Shrew, which will run July 26-31 at Samuell-Grand Amphitheatre, places a heavy emphasis on social media. Characters will have Facebook profiles, and during the play a live Twitter feed will create an interactive experience for the audience.

To celebrate its 60th anniversary in 2015, Junior Players added dance and musical programs to its roster. Students can express themselves on topics such as suicide, teen violence, body issues, and texting while driving by performing interpretive dance.

According to executive director Rosaura Cruz-Webb, this newly implemented dance program allows parents see what their children deal with on a day-to-day basis, and encourages conversations between parents and their children.

“I think we have sparked a conversation – a lot of the parents, a lot of the dads, come up to us and say, this is uncomfortable for me to sit through, but I did not realize that kids were going through that, and now we have to have a real conversation,” Cruz-Webb said.

Beyond improving their technical skills, Junior Players gives kids the chance to bond with others who have common interests; these bonds often follow them throughout their lives.

“I’ve met some of my best friends through the program,” said Ursuline Academy grad Eliza Palter.

Junior Players also gives the students confidence, and offers them a new outlook on theater that they might not get at their high school.

“It’s a really amazing program, and it changed the way I view theater,” said Rudy Lopez. Lopez now plans on majoring in education and minoring in theater so he can teach others what he has learned through Junior Players.

The high school level productions emphasize professionalism. Students are treated like working actors and are expected to deliver the same level of performance that adults would, from audition to showtime. Professionals are brought in to direct and choreograph the plays, which gives students an authentic experience of working in theater.

“We like to say that we’re professionals,” Cruz-Webb said. “What I love the most is seeing these students be professionals at such a young age. It empowers them to have their voices heard.”

Junior Players’ 2017 year will have an overarching theme of identity, and they will be performing a Shakespearean drama that has never been seen on their stage. The group will announce the title on August 5. 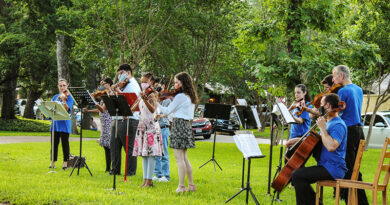 Have Strings, Will Travel