It’s one small initiative for the world, one giant leap for Dr. Barbara Fishel and the girls participating in the Small World Initiative (SWI) course at The Hockaday School.

The course was implemented for the 2015-16 school year after Fishel, the dean of studies and a science teacher at Hockaday, was approached by the director of SWI. The program began as a lab course founded by Dr. Jo Handelsman at Yale University in 2012, and has since expanded to around 98 universities and colleges globally. Hockaday will be the pilot high school involved.

The program was designed to encourage students to pursue careers and gain confidence in the field of science, while simultaneously addressing a world health threat: the draining supply of effective and approved antibiotics.

Hockaday’s science department had just developed a new biology course that would be available to students who don’t want to take an honors or AP course. So the timing for the school to partake in the program was perfect.

“We said yes because it fit in with the school’s existing goals,” Dr. Fishel said. “We implemented a new biology course that was going to be driven by a research component and analyzing soil as a resource of living things.”

For students with an interest in STEM (Science, Technology, Engineering, and Math), the SWI course is highly recommended and encouraged. It allows the students an opportunity to perform hands-on experiments and conduct laboratory research.

Shannon Anderson, an upcoming senior at Hockaday, says the goal is to find a new antibiotic that can be mass-produced. Once a soil sample is found, the bacteria must be isolated and tested against different pathogens that are becoming resistant to antibiotics.

“It’s one thing to sit in a classroom and hear a teacher talk about modules, bacteria, and how antibiotics work,” Anderson said. “But it tied into our research because it all became a direct correlation of what we were learning and what we were doing.”

Working at the designated Bio-Safety Level 2 Lab in the new science building at Hockaday, students had the opportunity to work at a college level using scale techniques and real lab equipment — and going through a lot of trial and error.

“Not only were we trying to figure out how the procedure worked, but we were also figuring out how to make this a real course for other high schools so they can participate in this program too,” Anderson said.

Students who participate in SWI are given the opportunity to present their work at the annual American Society for Microbiology conference in Boston. Anderson and another student, Lily Johnson, were chosen to present their work at this year’s GAINS (Girls Advancing in STEM) conference, which gave them an opportunity to connect with other high school girls interested in STEM. They also got to tour the STEM facilities at Duke University and University of North Carolina.

The course is targeted toward students at junior level who have completed the required physics and chemistry courses.
Fishel estimates around 30 or more students have enrolled in the SWI course for the 2016-17 school year, compared to last year’s nine students. Students who participated in the pilot course as juniors were given another opportunity to continue with it as seniors as a lab component of their optional Microbiology course.

“The course provided a context for the girls to understand some very difficult concepts and to see those concepts applied in order to abstract some ideas that are acceptable to them,” Dr. Fishel said. “So I hope it becomes a foundation for developing other kinds of authentic research opportunities within our curriculum … and that’s one of our long-term goals.” 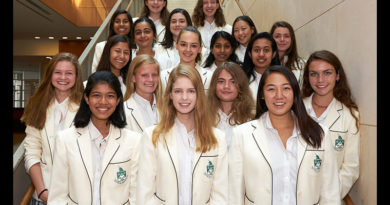