It started out as a simple way for father and son to enjoy sports together.

As a player development regional manager for PGA America, Chuck Higgins has been around golf for many years, but his young stepson Luke wanted nothing to do with it. Although a strong athlete, Luke preferred team sports where he could compete alongside his friends.

So in 2013, in addition to his full-time job as a golf professional, Higgins launched the University Park Pythons, a squad of golfers ages 6-13 that participates in the growing PGA Junior League Golf program.

“Here he was playing all these other sports, but I just couldn’t get him interested in golf,” Higgins said of Luke. “When it became a team activity he could do with his friends, that was a game changer.”

More than 65,000 children nationwide are involved in Junior League, and the Dallas area is one of the most popular, with about 65 teams in the Northern Texas PGA region.

As for the Pythons, the team started with 12 kids but has seen the roster more than double during subsequent years. More than 100 young golfers have gone through the program at various skill levels, most of them from the Park Cities.

“We have kids that are pretty accomplished golfers and some that are just beginning,” Higgins said. “They took the template for Little League and just applied it to golf.”

The Pythons compete in a league with teams tied to specific courses in Richardson, Garland, and Wylie, such as Sherrill Park or Firewheel. The Pythons typically hold a practice focused on skill development every Wednesday at Keeton Park in Dallas, and play on Saturday afternoons during each seven-week season.

The game format incorporates some features from other sports, with each team setting a starting lineup with substitutes. The nine-hole match includes a trio of match-play sessions, each with two players per team on three holes. That might sound confusing, but it typically equates to each player competing on about six holes.

Higgins sees Junior League as another way to develop an interest in golf among a younger generation.

“We’ve had kids that fall in love with golf individually, but now they can do it as part of a team environment,” Higgins said. “Sometimes it’s difficult to get the kids engaged [in golf] because they want to be with their friends.” 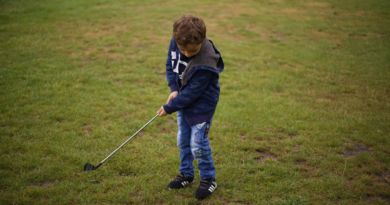 Carter Trying to Lead Scots Back to State Golf Glory