People kept telling him about Nakeie Montgomery, the multipurpose athlete who had led the Eagles to an SPC football title as a sophomore the previous season. But he wanted to see for himself.

Fast-forward to a scrimmage against Greenhill last August, and the new ESD quarterback’s questions were answered with a single pass.

“It wasn’t a great ball. He had to adjust a bit. I don’t even know what happened, but he was gone,” Washington said. “That’s when I knew that he would be my guy. Our chemistry is really high right now.”

Both Montgomery and Washington now hold multiple Division I scholarship offers after leading the Eagles to another stellar offensive season in 2015.

Yet the Eagles fell short in their quest for back-to-back SPC championships following a heartbreaking 38-31 overtime loss to Fort Worth All Saints’ Episcopal School in the title game.

That defeat gives plenty of motivation to Montgomery, Washington, and the other returning ESD players entering this year. In fact, offensive lineman Donny Carty got his teammates fired up when he posted newspaper coverage of the All Saints’ loss on the locker-room wall.

“It was a tough loss, but the worst thing we could do is beat ourselves up over it,” Montgomery said. “We’ve really learned from it and it’s really motivated our guys.”

The explosive ESD offense has led a resurgence in the program during the first two seasons under head coach Richard Williams and the Eagles could contend for a conference championship again.

“Last year didn’t end the way we wanted it to,” said Washington, who transferred from McKinney Boyd prior to last year. “We’ve got a lot of momentum going into this season.”

One of the biggest tests this season for ESD comes from SPC realignment. The Eagles previously competed in the conference’s southern division, which included perennial powerhouses such as Bellaire Episcopal and Houston Kinkaid.

With the SPC now grouping opponents based on enrollment, ESD will still play those teams during the regular season, along with All Saints’ and rival St. Mark’s. Just getting to the playoffs will be challenging.

“When I first saw it, I was excited,” Williams said. “We’ve played those teams. We welcome that competition. We’re up for the challenge.” 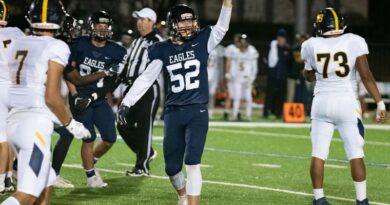