Though nearly seven years have passed since Preston Hollow resident and Covenant School student Carson Leslie died of brain cancer at the age of 17, his selfless spirit and courageous attitude live on through the work of the Carson Leslie Foundation.

On Aug. 19, the foundation, a nonprofit dedicated to children’s cancer research, coordinated with Dallas Cowboys owner Jerry Jones to host 10 young cancer patients in a private suite for a preseason game against the Miami Dolphins.

Before the game, team president Stephen Jones insisted that the Children’s Health VIPs, or “very important patients”, walk the field during warm-ups. It was an evening inspired by Carson’s dreams of helping other teens fighting cancer.

Carson’s mother, Annette Leslie, can recall Christmas Eve in 2009, when they learned he only had a matter of days to live. In the early hours of Christmas day, Carson quietly told her, “I thought I was going to make it.”

“I can never un-hear that,” Annette said.

Carson said he wanted doctors to study his brain tumors so other kids might not have to go through what he did.
He died three weeks later.

Six days before his death, Carson fulfilled a longtime dream when he signed a copy of his own published book Carry Me, a collection of journal entries in which he describes his life with cancer. Carson dedicated the book to children and teenagers combatting cancer who never got to tell their stories or voice their dreams.

“That’s just how Carson was,” Annette said. “He cared so much about those around him and always wanted to help others.”

The book is now part of the Library of Congress collection. Rep. Michael McCaul, chairman of Homeland Security, received a copy of the book from a mutual friend.

After reading it, he called Annette and asked to be a part of the first bipartisan congressional childhood cancer caucus. Despite the fact that she had little public speaking experience, she had no trouble speaking in front of a delegation of Republican and Democratic congressmen in Washington D.C.
“I was prepared for that absolutely,” Annette said. “To tell my boy’s story, it was very healing to me.”

Annette returned to Washington this September to speak to the group again, and thank McCaul for his work.

“Nothing is bipartisan anymore, which makes this even more special,” Annette said.

Sports were a big part of Carson’s life. His football coach at Covenant, Brice Helton, said he was a “stud athlete” before he got sick. After his diagnosis, Carson still attended games and practices as much as his health would allow.

Helton, who now coaches at Live Oak Classical School in Waco, thinks of Carson every year when he’s preparing for a new season. His goal is to build a team with an attitude like Carson’s.
“He’s a reminder of what we’re trying to teach, his perseverance, and how much of a fighter he was,” Helton said. “I miss having him around.”

The Jones family was also inspired by Carson’s courageous can-do attitude in the face of dire circumstances. Carson first met Stephen through a mutual family friend.
Jerry later signed him to an official Cowboys contract. In the forward to Carry Me, Jerry called Carson an inspiration, and said he would remain a Dallas Cowboy forever. Stephen called him a true friend with a courageous attitude towards life.

Before he died, the Covenant School asked Carson for permission to name their new gym in his honor. Annette joked that he “humbly named it the Carson Leslie Center.”

This is the second time the Carson Leslie Foundation has brought kids to a Cowboys game. Annette remembers how much Carson enjoyed meeting the Cowboys, and wants other sick kids to experience the same joy. She said the kids enjoy going out in a social situation with others who are going through the same thing.

“They love it,” Annette said. “They laugh and they talk and they flirt a little bit because they’re all in the same boat.” 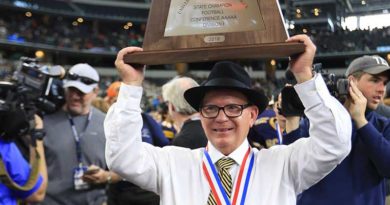