In terms of playoff positioning, Highland Park’s regular-season finale against Wylie East means nothing. Both teams are already locked into their postseason slots regardless of the outcome.

The Scots will be the top seed in the Class 5A Division I bracket from District 15-5A, while the Raiders will be the second seed in Division II. HP likely will face Mount Pleasant in the Region II bi-district round, while Wylie East will battle Marshall.

However, with those details are out of the way, Friday’s matchup at Wylie ISD Stadium still holds some significance for both squads outside of being just a glorified warm-up game.

The Scots (8-1, 6-0) can clinch the 15-5A title and complete an unbeaten run through the district. HP has won seven consecutive games and has showed steady improvement on both sides of scrimmage during that span.

Junior quarterback John Stephen Jones needs just eight passing yards to surpass 2,000 yards for the season. Last week, he completed all six of his passes for 104 yards and two scores before exiting before halftime of a 49-3 win over Royse City.

The HP rushing game has emerged as a force in recent weeks behind Jack Kozmetsky, who tallied two touchdowns against the Bulldogs and has reached the end zone nine times in the past six games. On defense, the Scots have allowed seven points or fewer in four of their past five games.

Meanwhile, Wylie East looks to continue its late-season momentum after winning three of its past four games to clinch a playoff berth. The Raiders (6-3, 4-2) will make their fifth postseason appearance in the program’s seven-year history.

Any game against Wylie East means the chance to see Eno Benjamin, who is one of the most dynamic playmakers in the state. The speedy running back has college offers from numerous top programs after originally committing to Iowa.

Benjamin has filled in as the quarterback for the Raiders for much of the season, but still keeps his focus on the ground. He’s rushed for 1,605 yards and 20 touchdowns and also has thrown for five scores. He rushed for 170 yards and three touchdowns last week during a 49-28 victory over Forney.

During the few instances when Benjamin doesn’t have the ball, Corbin Johnson and Ronald Smith will command the attention of the HP defense. Johnson has taken a majority of the quarterback snaps in the past three games.

If HP wins on Friday, it will continue a streak of seasons with one or fewer regular-season losses that dates back to 1999. After that, the Scots will make their 57th playoff appearance and 29th in a row. And if they win the district crown, it will be the program’s 51st such accomplishment.

HP to Play in Class 6A Next Season 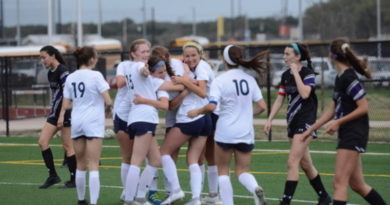