COPPELL — In a match featuring two of the area’s top ranked teams, Prosper and Highland Park kept taking swings at one another like champion prizefighters.

In the end, however, the Eagles held off an HP rally to win a five-set thriller in a Class 5A Region II area round match.

The loss ends a successful season in which the Lady Scots (37-10) finished second in District 15-5A during the regular season and swept Texarkana Texas High in the bi-district round of the playoffs on Tuesday.

“All year we found ourselves having to come from behind,” said Highland Park head coach Michael Dearman. “We knew we were not going to be swept.”

In the fourth set, HP jumped out to a 18-12 advantage behind several kills from high-flying senior Jordan Westendorff before the Eagles reeled off eight straight points to take a 20-18 lead.

With the score tied at 22-22, Ngo dumped a winner over the net, and the Lady Scots held on 25-23 to force a fifth and deciding set.

Westendorff, who finished with 17 kills, has committed to play sand volleyball at TCU next year.

“Our three seniors were superb at leading our team this year,” said Dearman. “In what was supposed to be a rebuilding year for us, they really set great examples for our underclassmen and were instrumental in our success.”

Prosper standout Abby Gargus, who has verbally committed to Houston Baptist, was helped off the court with an apparent knee injury and didn’t play in the final three sets.

HP’s Sarah Reedy smashed a kill on the first rally of the final set, but the Lady Scots went down 2-1 on a spike by Prosper’s Haley Killinger. Westendorff found an opening in the Eagles defense, and her perfectly placed tap tied the score at 2-2 before Prosper surged to a 7-3 lead.

Once again, HP fought back and trailed just 7-6, forcing Prosper to call a time out. The Eagles then went on a 5-0 run to go up 12-6.  Killinger’s swing was wide on the next point. Then, after a 12-shot rally, HP closed the gap to 12-8 before Ciera Hecht’s block gave Prosper the momentum.

The Eagles were able to serve out the game and won the fifth set 15-8 to advance to the regional quarterfinals, where they’ll face Frisco Wakeland next week.

“As we did all year, we fought through adversity and nearly pulled off the comeback,” Dearman said. “We just did not play well enough to finish it off and that’s in large part to how Prosper played.” 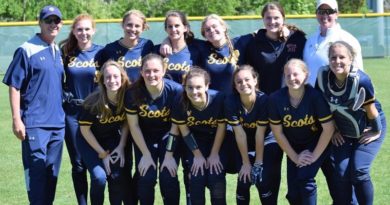