ROUND ROCK — Highland Park’s Jorge Rodriguez has a history of coming on strong at the end. At the Class 5A state cross country meet in Round Rock, he proved that again.

Rodriguez, a freshman, was in 40th place around the two-mile mark. He surged over the final 1.1 miles, however, bolting through the pack to finish 24th overall with a personal best time of 16 minutes, 8.9 seconds.

It was a banner day for Rodriguez, who ran the best race of his young varsity career on the biggest possible stage.

“I’m extremely pleased with how he ran,” said HP head coach David Ripley. “He gets to that two-mile mark and starts moving up. He goes and grabs runners. He’s competitive, and he’s been that way since I started watching him in the seventh grade.”

It’s certainly not the first time Ripley has watched Rodriguez overcome a slow start. The coach recalls Rodriguez tripping during a race as an eighth grader, causing “the whole pack to run over him.” Ripley said Rodriguez then pulled himself up, sprinted to the front of the pack, and ended up finishing near the front.

“He’s just a competitor,” said Ripley. “It’s been good to see him evolve into a real leader on our team.”

Rodriguez improved each week after finishing sixth with a time of 16:30.9 at the District 15-5A meet on Oct. 21. In regionals, he placed sixth again, but shaved more than eight seconds off his time. Rodriguez trimmed another 13.4 seconds off his mark at the state meet to finish his first varsity season a high note.

“He’s been trending lower each week since we started district,” said Ripley. “It culminated at the state meet. I couldn’t be prouder.”

HP senior Logan Gwinn, the only other male qualifier for the Scots, wrapped up his varsity career with a 94th-place finish.

“He ran better at the regional meet,” said Ripley. “But the state meet is a very tough environment with stiff competition. Overall I’m pleased with what Logan had done this season.”

The HP girls were also present at Old Settlers Park. They qualified as a team for the state meet after placing fourth at the Region II meet. The Scots placed 10th overall thanks in part to a 72nd-place finish from sophomore Maddy Stephens, who ran a 19:45.18.

HP’s other two female runners, Grace Teffaha and Annemarie Whalen, are freshmen. They’ll likely join Stephens in 2017 with the aim of making a return trip to the state meet. 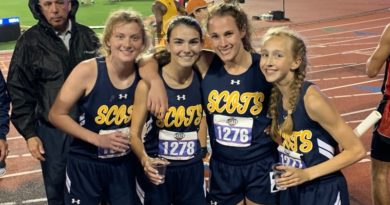