ARLINGTON — When it mattered most, the weary Highland Park defense dug deep, and the Scots will continue their season as a result.

George Stewart broke up a fourth-down pass in the end zone in the final minute, and HP held off Mansfield Legacy for a 14-7 victory in the Class 5A Region II final at AT&T Stadium.

The Scots advance to meet either Denton Ryan or Colleyville Heritage in the Division I state semifinals at 1:30 p.m. on Dec. 10 at the Ford Center at The Star in Frisco.

Stewart’s big play capped an outstanding performance by the HP defense against a Legacy offense that had scored at least 38 points in each of its previous seven games.

“That was a tremendous play. That last goal-line stand won the game for us,” said HP head coach Randy Allen. “We were just holding our breath every time that quarterback scrambled, because he was a threat to score.”

Every ounce of that defensive effort was needed for the Scots (12-2) to hold off a late rally by the Broncos (11-3), who were playing in their first regional final in program history.

HP allowed just 91 total yards in the first half and forced Legacy to punt on its first seven possessions. The Broncos finally started to wear down the HP defense with an impressive 18-play, 80-yard drive that reached the end zone on a fourth-down pass from Kendall Catalon to Keaton Dennis.

That cut a 14-0 Scots lead in half, and after the Broncos forced a punt near midfield, Catalon led them on another drive deep into HP territory that could have possibly forced overtime.

The final possession included a 25-yard scramble by Catalon and a 23-yard pass to Maliki Clay from reserve quarterback Daniel Manning, who entered the game for one play while Catalon was briefly shaken up.

But on fourth down at the HP 8-yard line, Catalon’s throw to the corner of the end zone was swatted way by Stewart in one-on-one coverage against Legacy receiver Troy Edwards.

“The Highland Park defense played lights-out. They made one more play than we did,” said Legacy head coach Chris Melson. “But I was proud of our defense for keeping us in the game.”

Indeed, the HP offense struggled to move the ball consistently and was outgained by an opponent for the second consecutive week. That was due in large part to an aggressive Legacy defense led by sophomore safety Jalen Catalon — the quarterback’s brother — who intercepted two passes on Friday, just like he did a week ago against Frisco Wakeland.

After a slow start, HP broke through with touchdowns by siblings Parker and Paxton Alexander. Parker caught a 15-yard scoring pass from John Stephen Jones to open the scoring midway through the second quarter.

Late in the third quarter, Paxton took a screen pass on third-and-goal from the 25-yard line and broke several tackles before crossing the goal line to increase the HP advantage to 14-0.

“They played hard on defense,” Allen said of the Broncos. “It was a struggle for us to make big plays and keep drives going.”

Jones completed 13 of 23 passes for 150 yards. However, the Scots didn’t get much yardage on the ground with leading rusher Jack Kozmetsky sidelined with a leg injury suffered during last week’s win over Mansfield Lake Ridge. HP ran for only 69 yards on 31 attempts between Jones, Paxton Alexander, and Jacob Urbanczyk.

J.T. Dooley and Jack Toohey combined for 10 catches for the Scots, who assisted the defense by controlling field position during the first half.

Kendall Catalon’s gutsy performance came after he suffered a shoulder injury that caused him to miss the second half against Wakeland. After being declared the starter during pregame warm-ups, he rushed for a game-high 65 yards while also completing 15 passes.

HP will make its first appearance in the state semifinals since 2013. That year, the Scots defeated Legacy 48-0 in the area round, also at AT&T Stadium, in the only other meeting between the schools. 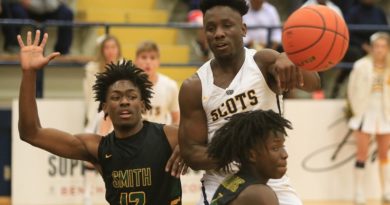 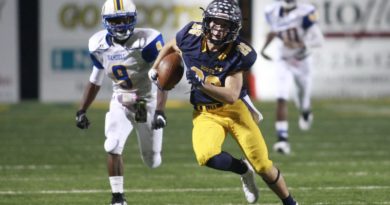