A cadaver dog named Faith confirmed Sgt. Keith McCain’s belief about where the body of his friend and fellow SMU police officer Mark McCullers just had to be.

Hundreds of police officers, firefighters, divers, kayakers, pilots, and others had searched on and beneath the water and along the banks – everywhere except for a more-than-mile-long drainage tunnel emptying into the Trinity River, he said.

But seven weeks after July 5 floodwaters swept McCullers and his white Dodge Charger into Turtle Creek at the Fitzhugh Avenue bridge, conditions still hadn’t allowed an adequate search of that tunnel.

“Divers can’t get in, because it’s too dangerous,” SMU Chief of Police Richard Shafer said.

Still, Shafer, McCain, and others in their department held out hope that conditions would change and opportunities for exploring the tunnel would emerge.

“In police work, you want to cover all your bases,” said McCain, whose nearly 28 years in law enforcement included serving as McCullers’ supervisor. “You want to make sure you’ve searched everything.”

McCain found McCullers’ remains on Aug. 24 in a new pile of debris near Oak Lawn Avenue and East Levee Street. The sergeant had not gone there to search, but rather to check conditions near the often submerged tunnel outlet.

The discovery brought a measure of closure to the SMU Police Department and to the McCullers family, and demonstrated what can happen when those often described as “first responders” keep on responding.

The determination and perseverance of SMU police officers merited their salute as People Newspapers’ 2016 newsmakers of the year. They were selected for their collective dedication and efforts and also as representatives of the hundreds of volunteers and public safety personnel who participated in the massive search.

McCain describes the riverbank where he found the remains as a surreally separate and natural place where he could view the Dallas skyline but not see or hear any roadways.

“You’re in the middle of Dallas, but it is totally quiet,” he said.

McCain was alone when he found the body, but estimates search efforts involved more than a thousand people.

The SMU Police Department has 32 officers, six dispatchers, and an administrative assistant.

“Everybody in the department at some time was out there – on duty or off duty – trying to find him,” Shafer said.

The chief would encourage his personnel to take time off to rest, only to get the reply, “I’m not going to rest until we find him.’’

McCullers, 46, served in the Marine Corps and worked private security before joining the department in 2015.

He was sitting in his sedan in the early hours of July 5, working off-duty private security at a Highland Park construction site, when heavy rains caused Turtle Creek to overflow.

“You know Turtle Creek is near,” Shafer said. “But who thinks there is going to be a flood there?”

News coverage described how McCullers called 911 around 1:40 a.m. as he realized rising waters were overtaking and moving his car. Video footage from the Fitzhugh Avenue Bridge shows him climbing out a door.

Divers, mounted officers, and boaters along with search dogs and handlers combed first the creek, then the river. Cranes were used to sift through debris, he said.

“As the search goes on, at some point they are going to say, you can’t find him,” Shafer said.

SMU held a memorial service on July 28 after McCullers was presumed dead.

The officer was survived by his Brady Bunch-like family. McCullers and his wife, Tiffany, had each brought three children to their marriage, Shafer said.

“It’s just such a bad feeling when you can’t find your loved one,” the police chief said. “We told her we won’t quit until we find him.”

The 3rd Battalion of the Texas State Guard, a maritime regiment, came to look. MARK9 Search and Rescue, of Mesquite, provided Faith, viewed by SMU officers as the key search dog.

More rain thwarted plans for a mid-August excursion into the drainage tunnel but also may have served to flush out the mass of tree limbs, trash, and other debris where the body was found, McCain said.

“It was nice that we found him and that it was his supervisor,” Shafer said, acknowledging, “It’s weird to say it was nice to find a dead body. It was just a gut-wrenching deal.” 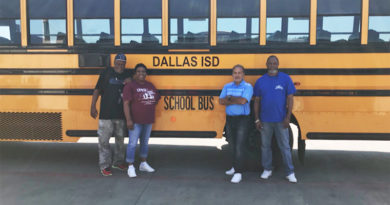