At least Highland Park can enter the bulk of District 15-5A play with plenty of experience in close games. That’s the bright side.

However, those nail-biters didn’t go in HP’s favor at the Allen Holiday Invitational tournament, where the Scots dropped three games by a combined five points.

HP fell to Rowlett 70-68 and Carrollton Creekview 57-55 in its first two games before bouncing back with a 79-75 win over Frisco Heritage. Then they lost to Fort Bend Travis 44-43 on the final day.

Will Enzor continued to be a bright spot for the Scots (9-9, 1-0) with 31 points against Rowlett. Ethan Nussbaum led HP with 17 points in the Creekview game, while Michael McMonigle posted a team-high 20 points against Heritage.

On the girls side, Highland Park dropped its first two games at the prestigious Sandra Meadows Classic in Duncanville before finishing with a win in the consolation bracket.

The Lady Scots (12-7, 3-0) carried a seven-game winning streak into the tournament but fell in their first-round game to California powerhouse Bishop Alemany 70-41, despite a game-high 18 points from SMU signee Morgan Smith.

HP squandered an early lead in a 40-37 loss to Waxahachie before rebounding with a resounding 62-30 victory over Houston Westside. Mary Kemp paced the Lady Scots with 19 points in that game.

Both HP squads will return to district action on Tuesday against Mesquite Poteet, with the girls playing at home and the boys on the road. 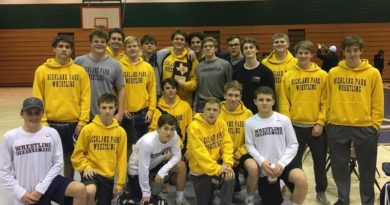