Spend five minutes talking to fashion designer Christina Benedetti and you know where her passion lies: making men look good in their shirts.
“When people meet you, before they even speak with you, they’re judging,” Benedetti said. At her company Benedetti Beyond Bespoke, she helps men make an impeccable first impression.
Benedetti, who lives off Turtle Creek Boulevard, offers custom shirts designed to complement a man’s body shape, with old world details such as front yoke seams cut on the fabric’s straight grain and chevroned at the center back to make the shoulders look stronger and wider, or hand-embroidered monograms that can be applied to cuffs or to the left chest.
“Getting dressed and knowing you look good should be easy,” she said. “You shouldn’t have to think about it, because we think about it for you.”

At her two Dallas locations, Uptown on Oak Lawn Avenue and downtown on Elm Street, Benedetti sells exclusively custom clothing.
Benedetti spent years working directly under Calvin Klein, where she developed an eye for minimalism and exquisite detail. Her Calvin Klein men’s Black Label won the Designer of the Year award from the Council of Fashion Designers of America Menswear.
She also designed and developed J. Crew’s men’s line, where she introduced tailored clothing as well as “made in Italy” products.
“I got to build something from scratch,” she said, “since it was a couple of chino pants tucked in the corner of a women’s store before.”
Her website, benedettibespoke.com, lists locations in Milan, Italy and the United Arab Emirates, in addition to her Dallas locations. She plans to expand to Argentina, California, Florida, New York, Panama, and Uruguay.
While the measuring and the design process is done both in clients’ homes and at locations, all the manufacturing is done in Italy by carefully selected artisans.
“These are people who for generations have been producing these products,” Benedetti said.
Her husband Alessio, who comes from five generations of Italian weavers, handles logistics and product development at the Benedetti design studio in a converted textile mill just outside of Florence in Alessio’s hometown of Prato.

The company soft launched in February and went online in July. Shirts start at $250 with a four-week turnaround. Plans include adding a more casual, though still custom, option for less than $200.
The 10-month-old company also sells seven-fold silk ties from Como, Italy, which Benedetti says has a tradition of weaving silk at the perfect density for men’s ties.
She has also expanded into a product she never expected: golf accessories.
Benedetti was looking for golf cufflinks for her husband, but could only find trinket-like options that reminded her of a “little girl’s charm bracelet,” so she tried something simple and stuck a golf tee through a cuff.
“I love the little surprise things that men’s accessories seem to hide,” she said.

Benedetti cast knotted golf tee-inspired cufflinks in silver, and one of her Italian vendors suggested she also create a ring for herself out of the discarded prototypes.
The result is Benedetti’s Italian-manufactured silver Tee Time accessories collection for men and women, available in typically male-dominated golf shops including the Four Seasons Las Colinas and the Old Course at Broken Sound in Boca Raton, FL.
Benedetti’s two Dallas locations operate by appointment only. Benedetti conducts many appointments in-home, where she also offers a review of clients’ wardrobes.
Share this article... 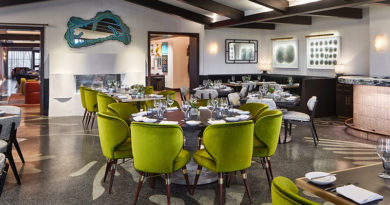