Highland Park used a stellar defensive effort to rally past Wylie East 33-29 in a showdown of first-place teams in District 15-5A on Friday.
The Lady Scots (16-7, 7-0) remained unbeaten in district play after limiting the Lady Raiders to 12 points in the second half. HP’s Eve Loewe was the only player in the game to reach double figures with 10 points. Mary Margaret Roberts added nine points, and Morgan Smith contributed eight.
The victory puts the Lady Scots in sole possession of the 15-5A lead at the halfway point. HP will travel to Lovejoy on Tuesday.
On the boys side, a sizzling start by a balanced offensive attack kept HP perfect in District 15-5A, as the Scots cruised to a 75-44 win over Wylie East.

The Scots (13-9, 5-0) opened the game with a 26-4 run and extended the margin to 64-29 after three quarters. Will Enzor paced HP with 14 points, followed by Preston Landes with 13 points, Matthew Lodwick with 12, and Ethan Nussbaum with 11.
The Scots will host Lovejoy on Tuesday prior to a showdown against second-place North Forney to wrap up the first half of district play on Jan. 20.
Share this article... 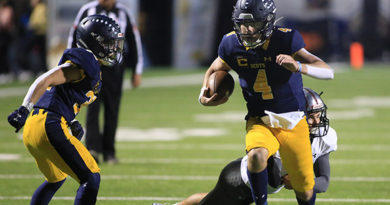