We appreciate State Sen. Don Huffines’ willingness to serve as an elected official, but we strongly believe that his bill for educational school savings accounts will hurt an already crippled public school system. We urge the legislature to make funding of public schools a priority and not take even more funding away from public schools.

Article 7 of the Texas Constitution says it is “the duty of the Legislature of the State to establish and make suitable provision for the support and maintenance of an efficient system of public free schools.” This is not happening in the state of Texas.

If this legislation passes, for every student who leaves the public school and requests a voucher, a.k.a. “educational savings account” (ESA), approximately $6,000 per student would be funneled from the public school.

Although that might only be a handful of HPISD students, HPISD’s costs associated with them would likely not decrease. If two students from each of our seven schools opt for these vouchers, the district would receive about $84,000 less funding from the state. However, HPISD would still have the same costs. Texas continues to be in the bottom third of states in per pupil funding. How can lawmakers justify sending funds to private schools when they can’t fund the public school system we currently have?

Proponents of ESAs would have you believe that their plan would allow students attending poor-performing schools to escape to private schools where they would have an opportunity to succeed.

The voucher as initially proposed by the legislature this session would not even cover half of that tuition. Unlike public schools, these private schools may accept or reject whomever they choose and are not required to provide an education to students with special needs.

Since 1994, HPISD has sent more than $1.2 billion dollars to Austin to be redistributed to “property poor” school districts. The Highland Park Education Foundation was formed with the mission “to actively seek resources and relationships to assist in the preservation and enrichment of quality education throughout the HPISD.”

In 2003, a group of volunteers began the district’s Mad for Plaid campaign to provide assistance toward the school district’s budgetary shortfall due to recapture.

Each year, the HPISD School Board wisely recommends to keep our property taxes low in order to encourage Park Cities residents to use the money saved to donate towards the campaign, and thus, not available for recapture by the state.

The reality of finance in HPISD is that we would not be able to fund our schools at their current level of excellence without the private fundraising efforts within our district. If ESAs pass in the legislature, then our community would have to redouble our efforts to increase fundraising efforts even more to account for the additional deficit which we would face.

As a parent of four children, there is a very finite limit on the funds we can contribute and we are already feeling our finances stretched too thin.

Property taxes have risen 44.2 percent since 2008, while education funding increased by only 12.7 percent. This makes me question the priorities of our legislature.

When the Texas Supreme Court ruled that Robin Hood was constitutional last year, it also said, “Texas’ more than five million school children deserve better than serial litigation over an increasingly Daedalean ‘system.’ They deserve transformational, top-to-bottom reforms that amount to more than Band-Aid on top of Band-Aid. They deserve a revamped, nonsclerotic system fit for the 21st century.”

In 2016, Wayne Pierce, director of the Texas Children Advocacy Project, said that even though the court had given legislators the power to make a difference, he doubted whether they would do enough and likened their response to going out on “some tangential rabbit trail.”

ESAs are nothing more than a rabbit trail, and I urge you to contact Sen. Huffines to let him know they are the wrong direction for Texas public schools.

Lisa Kilpatrick is the president of the Highland Park High School P.T.A.

Come ‘Meet the Scots’ on Monday 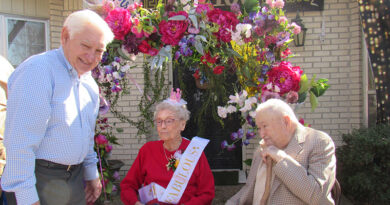