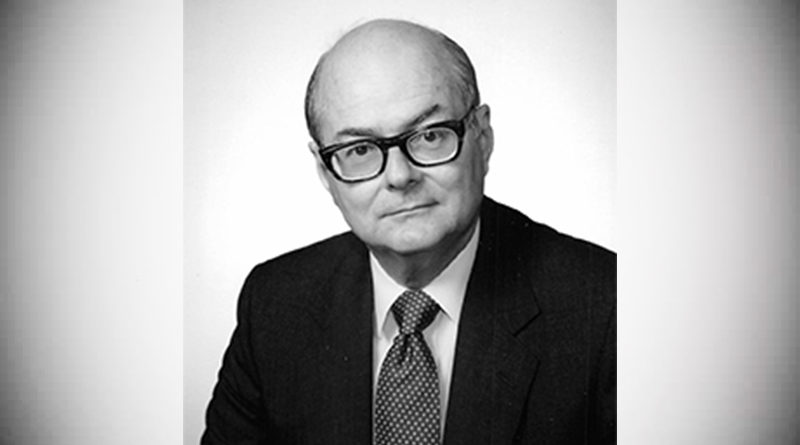 Henry Gilchrist, beloved family patriarch, true Texas gentleman, and dear friend and colleague to many, passed away peacefully at home and into the loving arms of His Lord and Savior, Jesus Christ, on May 6, 2017.

Born in Austin, Texas, on November 6, 1924, Henry moved to College Station in 1937, when his father, Gibb Gilchrist was named Dean of Engineering at Texas A&M.  Henry graduated from A&M Consolidated High School in 1942, and entered A&M, where his father was President (later becoming the first Chancellor of the A&M system).

Following service in the Army during World War II, he earned a Bachelor of Science in Civil Engineering from Texas A&M, Class of ’46, followed by law school at the University of Texas. During law school, Henry served as Associate Editor of the Texas Law Review, and was a member of Chancellors and Order of the Coif. He graduated with honors in 1950.

Henry met the love of his life, Pat Lynch, during her early college days at the University of Texas.  They married in 1951. Pat and Henry spent one year in Pampa, Texas, where he was practicing law, but Dallas beckoned.

In 1952, he joined Jenkens & Bowen, where he ultimately became the principal attorney for the Murchison family. Henry represented the Dallas Cowboys Football Club for 25 years and was lead attorney for the construction of Texas Stadium.  He served as partner of Jenkens & Gilchrist Law Firm for almost 50 years.  The Dallas office of Jenkens & Gilchrist was acquired by Hunton & Williams in 2007.  Henry retired at age 91 in 2016.  Hunton & Williams honored him, naming the conference area, the “Henry Gilchrist Conference Center.”  The Texas Bar Foundation awarded him the Outstanding 50 Year Lawyer Award in 2010, often described as the most prestigious statewide honor to Texas attorneys who adhere to the highest principles and traditions of the legal profession and service to the public.  Henry also received the Dallas Bar Association’s Justinian Award in 1995, the Aggie Lawyer of the Year in 2003, and was included in the Best Lawyers in America, 1990 – 2010.

A lifelong Methodist and active member of Highland Park United Methodist Church, his committee memberships included the Church Building committee for the Wallace Building and the church expansion.  He also enjoyed serving as Trustee of the United Methodist Higher Education Foundation, which awards 900 scholarships annually.

An innovative thinker, with a keen intellect and quick wit, Henry set the tone for Jenkens & Gilchrist as a place of excellence, hard work, and professionalism, while still fostering a caring camaraderie and sense of fun.

For all the accolades, Henry, always a gentleman, never once spoke of his accomplishments, perhaps taking heed to his father’s wise words (using a family-favorite train analogy), “Don’t use all your steam on your whistle.”

Preceded in death by his parents, Vesta Weaver and Gibb Gilchrist, and wife Pat.  He is survived by his son Tom Gilchrist and wife, Jennie, and grandchildren John and Mary Eleanor Gilchrist; his daughter Terri and her husband Chester Plauche; sister-in-law Carole and her husband Billy Bates, and their children Larry and his wife Andrea, Laura and her husband DeWayne Hodge, and their families.

Henry is also survived by a wealth of friends and colleagues who admired his integrity, humility, generosity, and thoughtfulness. He will be dearly missed by all who knew him.

A service celebrating Henry’s life will be held in the sanctuary at Highland Park United Methodist Church (3300 Mockingbird Lane, Dallas, TX, 75205) on Wednesday, May 24, at 4:00 p.m., followed by a reception in the Great Hall.

If desired, and in lieu of flowers, memorial gifts may be made to: HPUMC c/o Wesleyan Fellowship Class Benevolence Fund, 3300 Mockingbird Lane, Dallas, TX, 75205; or the Dean’s Scholarship Excellence Fund at The University of Texas School of Law, 727 East Dean Keeton Street, Austin, TX 78705; or the Texas A & M Foundation, 401 George Bush Drive, College Station, TX, 77840, in support of the MSC Enrichment Fund (0457003); or the charity of your choice.

But the fruit of the spirit is love, joy, peace, patience, kindness, goodness, faithfulness, gentleness and self-control; against such there is no law. Galatians 5:22