COLLEGE STATION — Not reaching his goal for the past two seasons has weighed on Highland Park’s Phillip Quinn. In his previous two trips to the UIL state tennis championships, Quinn came up just short, finishing second in mixed doubles both times.

Quinn and Madison McBride rallied past Hillcrest’s Anne Gilliam and Zane Kohrs in three sets for the Class 5A mixed doubles title on Friday, 3-6, 6-0, 6-2.

“All this relief off my shoulders,” Quinn said of HP’s fifth mixed doubles title in school history and fourth in the past six seasons.

This wasn’t the first time Quinn and McBride had stared down Gilliam and Kohrs from across the net this season. The two pairs collided in the Region II finals a few weeks ago. In that match, just like the one on Friday, Hillcrest took the opening set.

Sitting on the bench during the changeover, the message was simple for McBride and Quinn — we are not going to lose.

“That’s what I told him; this happened and we can pull it out,” McBride said. “I think the first set we came out and we had to get the nerves out. Just played a little tight. Then had to play like nothing to lose.”

Coming back with a flurry, Quinn and McBride rolled to the victory by taking the next two sets while dropping only two games.

“It’s really sweet for him to get a championship,” HP head coach Dan Holden said. “Madison’s come so far in her game in the last year. She wasn’t a lineup player for us a year ago. This fall she was in our lineup and then she made a huge jump. I couldn’t be more proud of her, too. Her tennis has really come along.”

The ending wasn’t as happy for the HP girls doubles tandem of Logan Lett and Katherine Petty, who lost in straight sets (6-4, 6-4) to Fiona Crawley and Brittney Wilbur of San Antonio Alamo Heights in the final.

“She’s got a very bright future ahead of her,” Holden said of Petty, who’s only a freshman. “She’s one of the best doubles players in the nation in the 14-and-under [division]. Logan Lett is a senior and we’re so sad to see her go. She’s had an incredible four years.”

Lett leaves HP as a highly decorated athlete. She qualified three times for the state tournament as an individual and played a role in three team state championships. Lett won those team titles in the 4A, 5A and 6A classifications.

“Just the community has meant everything,” Lett said. “For all four years, I felt the support of the community, coaches and faculty. Without this, we couldn’t have gone as far in the past and been as successful.”

Lett will attend the University of Texas but won’t continue playing tennis in college. Despite the age difference with her doubles partner, Lett took on the role of mentor to Petty.

“I felt pressure leading her because of how well we did this season,” Lett said. “It sets the expectations for her for the next three years, which I know she’ll exceed.”

Going through this experience as a freshman will be valuable in the future, Petty said, praising Lett’s leadership during the past several months.

“It’s meant a lot for her to guide me through this experience,” she said. “It helped a lot having a partner with more experience in this area of tennis.”

Holden expects Petty to be a factor at many more state tennis tournaments, both in the fall and the spring. 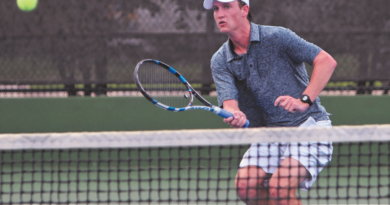 HP Senior Is a Doubles King

There’s No Missing These Running Scots