“If you had to stand in that spot for 152 years, how would you look?” asked Micah Pace, Preservation Tree Service arborist. Pace recently assisted in a risk assessment of the landmark tree in the median of Armstrong Parkway near Preston Road.

The Dallas firm found four main spots of decay: to a structural root southeast of the trunk, to two limbs high above the ground, and to the upper trunk.

Pace’s report rated the potential for failure of a damaged limb or trunk as probable within the next 12 months. Such an occurrence could bring significant to severe consequences to passing traffic on Armstrong Parkway, as well as to anyone working in the median below the tree, a memo to town leaders concluded.

“It was painful to listen to that report and see the damage done to the tree,” Mayor Joel T. Williams III said.

Pace attributed the limb and trunk decay to large removal cuts made over time.
“Trees don’t heal themselves,” Pace explained. “They just cover up the wound.”

To improve the health of the tree and substantially reduce risk levels to the public, Preservation Tree recommends a variety of steps.

Based on those recommendations, town leaders soon will replace turf around the trunk with shredded hardwood mulch, adjust watering to levels appropriate for a tree rather than grass, and likely install a wrought iron fence around it this fall.

The firm will also replace 11 existing support cables and the lightning protection system, apply growth regulator to slow canopy growth while increasing root development, and monitor the tree with additional inspections every six to 12 months.

Further deliberation will be required to reach a decision on how to modify the annual tree lighting, described as the oldest such ceremony in Dallas County, town leaders said.

The town still needs more information, town administrator Bill Lindley said, including answers to such questions as “With the Christmas tree lighting, does that impact the tree?”

Lindley floated the possibility of using lasers in place of strings of lights to decorate the tree for the holidays.

“If it’s going to stay, we need to do everything we can do to make it safe,” Williams said. “If that means we modify the oldest Christmas tradition, we modify it.”

Identified as “The Big Pecan Tree” on hptx.org, the mammoth 75-foot by 75-foot monarch has enjoyed a long history of protection.

Civil War veteran Joseph Cole nurtured the plowed-over tree as a “testament to life” and to counter the destruction he saw during the war. After the land was sold years later, developer Hugh Prather Sr. continued to defend the tree. It became known as the “Million Dollar Monarch,” after he rejected a seven-figure offer for a lot that would have included the tree. In 1927, Flippen-Prather Realty held the first Christmas lighting.

Town leaders value that history and tradition but will prioritize the safety of residents and others who may visit the pecan, Williams said. “As important as the tree is, if it gets to the point where the [risk] is too extreme, we will have to consider other steps.” 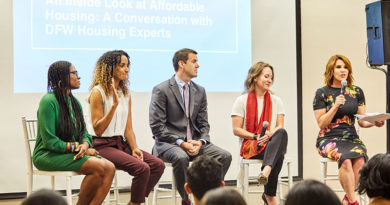