For many Texas teenagers, exposure to fencing comes only through big-screen swashbuckling adventures like The Three Musketeers.

As Lauren Kim tells her ESD classmates, however, fencing is much more than choreographed swordplay. And she’s got the expertise to prove it.

Kim has been around fencing her entire life. Her father Michael competed in college at the University of Iowa and has owned Lone Star Fencing Center in Dallas for many years. He also coached at St. Mark’s and Hockaday.

Lauren became a member of her dad’s club at age 10 and quickly developed an affinity for the sabre discipline.

“It’s an individual sport, so when you accomplish something it’s all on you,” she said. “It’s a technical sport that takes time to master, but it’s very rewarding in the end.”

She traveled to her first international tournament in Austria when she was in eighth grade, and has competed year-round at some of the top events around the world ever since.

Earlier this year, Lauren defeated Ibtihaj Muhammad, who earned a bronze medal in the team competition at the 2016 Summer Olympics in Brazil and is perhaps best known for becoming the first U.S. Olympian to compete while wearing a hijab.

Lauren admitted that sometimes fencing must take a backseat to some of her other activities. She ran on the ESD track team for three years, and this year is rowing on crew. She’s the editor-in-chief of the school’s literary magazine. And earlier this spring, she turned down the chance to attend a tournament in Korea in favor of her senior prom.

However, fencing provided an avenue for Lauren to fulfill a dream and attend Yale in the fall. She will become the only Texan on the fencing roster for the Bulldogs.

“I think I’ll be done after college,” Lauren said. “I want to go to med school and do all of these other things that don’t allow time for daily practices.”

The Cambridge School of Dallas 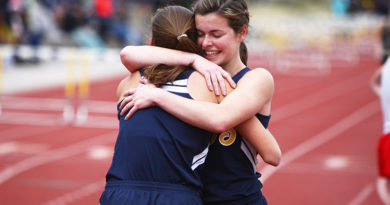