TACA announced its next board chair will be Michelle Thomas, who will serve a two-year term beginning in January. She will succeed Donna Wilhelm.

“We are thrilled that Michelle will chair the board of directors, and I know TACA will be in excellent hands with her at the helm,” Wilhelm said. “Michelle has a rare combination of leadership abilities, strategic insight, and skills that will help elevate TACA and its mission of providing financial support and resources to the arts.”

Wilhelm indicated that Michelle will be an invaluable leader to TACA as it begins implementing a new strategic plan that includes several transformative initiatives:

“I am honored to lead TACA, which has focused on transforming lives through the arts for 50 years,” Thomas said. “With TACA expanding its grants to include the visual arts, as well as creating a social impact fund, it’s an exciting time to work with the other board members to help lead the organization to even greater heights.”

A longtime advocate for TACA, Thomas chaired its TACA Silver Cup Luncheon and served as a board member. TACA has also received grants and support through her company, JPMorgan Chase.

Thomas has been in the financial industry for more than 25 years as a banker, human resource, and community development professional. She serves many volunteer roles, including the Advisory Board of the Center for Nonprofit Management, Junior League of Dallas, Kipp DFW Council, Board of Directors for the Methodist Health Foundation, and UT Southwestern Medical Foundation.

She is an alumnus of Leadership Dallas and a member of Dallas Assembly and Dallas Summit. Thomas was recognized as a 2014 Minority Business Leader in the Dallas Business Journal and was a recipient of the 2015 Business and Civic Leader award from the Dallas Black Dance Theater, the 2015 Income Award from United Way of Metropolitan Dallas, and the 2017 Heritage Award from the African American Museum. Under her leadership, JPMorgan Chase was named Outstanding Corporation of the Year by the Association of Fundraising Professionals in 2015.

A Dallas native, Thomas earned a Bachelor of Science in business education from the University of Oklahoma and an MBA from Dallas Baptist University. In addition, she received her teaching certification from the states of Texas and Oklahoma.

TACA’s Party on the Green is This Weekend

TACA Board of Governors 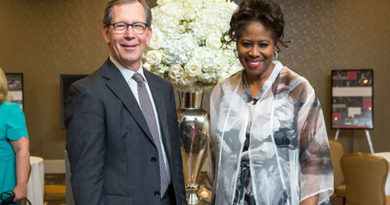 TACA Board Announces Retirement of President