What’s a chief to do when a fussy baby on the front row interrupts his presentation to the Highland Park Town Council?

Rick Pyle, director of public safety, turned around and picked her up.

“It was just an impulse,” he said. “I thought I’d distract her for a second.”

Emily, the daughter of Sgt. Zach Sitton, reacted as if transferred to the arms of a familiar favorite relative. She quieted, at least for a little while. Soon she made her way to the arms of assistant director of public safety Paul Sandman while Pyle finished formalizing her father’s promotion.

“I’ve got three kids of my own, and I tell these [officers] the most important things are family,” Pyle explained. “If they are happy at home and are fulfilling their family obligations, they are a much better employee when they come here.”

Town administrator Bill Lindley saw in that moment an example of the family-style leadership that is central to the 118-employee Highland Park government. “It’s who we are,” he said.

That culture grew out of the 1960s and ’70s when J.D. Hancock served as town administrator, and is bolstered by having the Department of Public Safety located alongside other departments at Town Hall, rather than off in its own building, Lindley said. “That helps that sense of kinship.”

Pyle was 21 when he went to work for the town 31 years ago. The town had already combined its police and fire services, and would soon require all officers to also train as paramedics.

He became director of public safety two years ago after Chief Chris Vinson died unexpectedly. Pyle’s love for the town and his department helped make him an easy choice, Lindley said.

Pyle has a knack for serving as a friend and confidant to his employees while still having them “know he’s the chief, and there comes a point where the stars are on the collar,” the town administrator added.

[pullquote-left]“I’ve got three kids of my own, and I tell these [officers] the most important things are family.”[/pullquote-left]

Lt. Lance Koppa said Pyle remains the kind of leader who works alongside his people.

“Even now, if he was to come down and see me working in the engine room on something and see I needed some help, he’s going to jump in and get in there with you,” Koppa said.

Pyle also demonstrated what Koppa called a “labor of love” by personally making plaques featuring officers’ promotional letters, patches, rank pins, and department challenge coins.
The decision to start that tradition has a financial component, as well as a personal one.

“I did look to see the cost of having them done and thought, ‘I can do that,’” Pyle said. “I thought it meant more for it to be personally made and personally presented.” 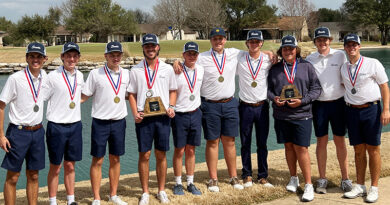