Highland Park has a short week to prepare for its final nondistrict game on Thursday against Mansfield Timberview.

However, looking at the bright side, that gives the Scots an extra day to get ready for a more important contest — the District 15-5A opener on Sept. 22 at Lovejoy.

But first, HP will travel to Newsom Stadium to face the Wolves, looking to carry over momentum from an impressive 32-21 win over Waxahachie last week.

The Scots (1-1) made strides from their season-opening loss at Rockwall, especially on defense, when HP neutralized the dynamic Waxahachie offense and almost posted a second-half shutout.

HP forced two critical turnovers by the Indians in that game while not committing a miscue of its own. John Stephen Jones threw for 290 yards and two touchdowns — both to Finn Corwin. Conner Allen rushed for 110 yards and a score. And nine different receivers caught passes.

The Scots will hope for a result similar to last season’s 31-0 thumping of the Wolves that provided a springboard into district play.

Timberview (1-1) will look to rebound after committing five turnovers last week during a 45-21 home loss to Frisco Lone Star.

Dual-threat quarterback Jyron Russell has been sharp through two games, with three rushing touchdowns and another through the air. Stacy Sneed and Jalen Knox also are among the top playmakers for the Wolves.

Too Cold? Blame The Frost Family 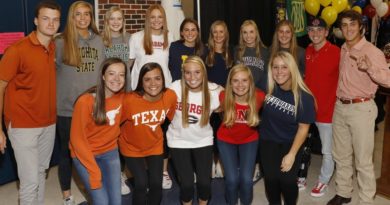