Every year, thousands of Dallasites set aside their sky-high stilettos and perfectly polished Oxfords for a good old-fashioned pair of cowboy boots to wear to the Cattle Baron’s Ball – the largest one-night fundraiser for the American Cancer Society.

Granted, the boots are usually still worthy of the runway.

Whatever the footwear, the shoes to fill are always big for the next round of leadership for the event. Good thing for this year’s co-chairs, Anne Stodghill and Sunie Solomon, the boots fit just right.

It’s been said that when you’re passionate about what you do, you’ll never work a day in your life. That theory holds up for Stodghill and Solomon when it comes to Cattle Baron’s.

The event’s cause is the main driving factor for both ladies.

Stodghill’s family has been directly impacted by cancer: Her father is battling skin cancer, one sister-in-law had breast cancer, and her husband’s sister-in-law passed away from colon cancer.

“When cancer hits your family, you’re like, ‘I’ve gotta do something,’ ” Stodghill said. “I want to make sure people who are diagnosed with cancer can be survivors of cancer.”

Solomon lost her grandmother to cancer, and her daughter’s godfather is fighting the disease for the fourth time.

“This is at the top of the list of things we’ve gotta fight,” Solomon said. “I tell my daughter every morning: ‘We’re put in this world to make it a better place.’ ”

Neither of the women are strangers to the responsibilities of organizing a large event.

In fact, Stodghill and her husband, Steve, most recently spearheaded the CancerBlows concert in May at the Meyerson Symphony Center. Some of her other philanthropic endeavors involve the Dallas Charity Network, John Wayne Film Festival, the Dallas Symphony Orchestra, and the Dallas Film Society.

Although she told herself she was only going to chair one event this season, she couldn’t turn down the opportunity to lead the 2018 Texas Ballet Theater’s Tutu Chic Fashion Show and Luncheon.

Under Stodghill and Solomon’s leadership, Cattle Baron’s is in for another successful year.

The 44th annual Cattle Baron’s Ball will be held from 7pm to 2am on Oct. 21 at Gilley’s Dallas, 1135 South Lamar Street. Visit cattlebaronsball.com for tickets.

Fifth Annual History With A Twist 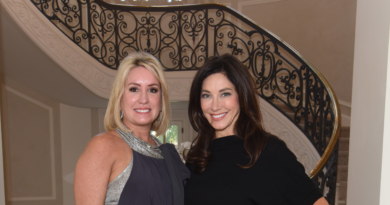