A new law clamps down on how much municipalities can charge wireless carriers to mount 5G equipment within public rights-of-way.

Senate Bill 1004 went into effect Sept. 1, limiting local governments to collecting payment of $250 per network node per year. Many cities had planned to charge $1,000 per node or more.

“That [new amount] certainly, in my opinion, doesn’t compensate the city for the staff time to review these permit applications,” said Dale Harwell, University Park IT director.

But Dallas and 21 other cities have filed suit, saying the law violates the anti-gift and non-delegation provisions of the state constitution. The suit argues that SB 1004 would make cities illegally transfer “wealth of as much as hundreds of millions of dollars from municipal coffers to private telecommunications companies each year.”

Network nodes are iPad-size connection points that are used along network routes, transmitting cell phone signals. They can be attached to light poles, traffic signal poles, street sign poles, and stand-alone poles. Often, fiber optic lines are installed along with the nodes.

The nodes are anticipated to increase the quality of signals in the area, which most people realize might require installation of such devices, Harwell noted.

“I’m sure city hall will field a few calls about what looks to be additional equipment on poles,” UP communications officer Steve Mace said.

Several years back, the city put traffic signal devices on most of the major intersections. The devices, which looked like cameras, were thought by some to be security or red-light cameras. Residents complained.

The Park Cities have not joined the lawsuit but have modified their ordinances to address such design standards as size, location and color of the devices.

“I don’t expect that there’s going to be a lot of blight because of this, because we’ve done our due diligence to prevent it,” Mace said.

Highland Park town administrator Bill Lindley said the town will lose money from the changes, but he doesn’t expect to see other types of problems arise.

“As utility poles are in alleys, either positive and/or negative impacts are offset,” Lindley said. 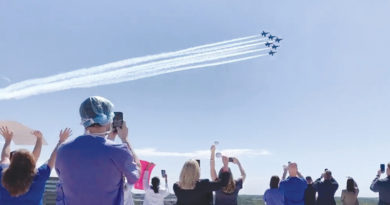 Images of Prayer, Love, and Support

Stop for the School Bus