In its quest to win another district championship, Highland Park’s most important game might come on Friday.

The Scots will start the second half of the season by hosting unbeaten West Mesquite in a showdown of first-place teams in District 15-5A. Both teams are tied with Mesquite Poteet atop the league standings.

HP has won four straight games, including a 63-42 victory over resurgent North Forney in its last game before a bye week. The Scots (4-1, 2-0) have scored at least 32 points in every game so far, and average almost 500 yards of total offense.

John Stephen Jones has been terrific at quarterback, completing almost 66 percent of his throws with 19 touchdowns and just two interceptions. He has 1,490 passing yards at the halfway point this season.

Several other playmakers have also made an impact for HP. Conner Allen and Paxton Alexander have proven to be a formidable duo at running back. Cade Saustad leads the Scots in catches and yardage among receivers, while Finn Corwin has tallied a team-high six touchdowns on just nine grabs.

However, the Scots likely haven’t faced a defense of West Mesquite’s caliber thus far. The Wranglers (5-0, 2-0) have allowed only 11 points per game and have won their five contests by an average margin of more than 27 points.

Although the defense headlined by safety Dayven Coleman (who has verbally committed to UCLA) has earned much of the attention, West Mesquite also has some weapons on an offense that has surpassed 30 points in every game this season.

Connor Neill, the son of head coach Jeff Neill, had three touchdown passes during a 30-10 win over Lovejoy on Sept. 29. He has thrown for 11 scores this season, compared to just two interceptions. The rushing attack is led by Curtis Williams, who has accumulated 837 yards and six touchdowns.

If there’s an intangible, of course, it might be the home-field advantage for HP, which has passed every test it’s faced at Highlander Stadium in district play for almost two decades. 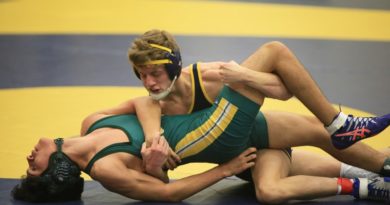