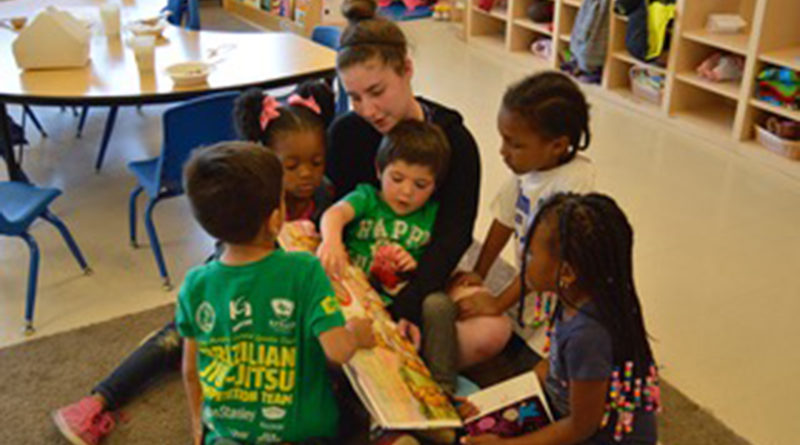 The Hockaday School is teaming up with the Dallas Yoga Center to enrich learning experiences and help students cope with everyday stress.

“Notably, schools are beginning to integrate mindfulness as a response to the ever-growing stressors, from extreme performance pressure to the challenges of growing up in poverty,” he said.

Mindfulness practice can involve a variety of breathing and meditation techniques. The Hockaday program does not integrate yoga but does include “mindful movement.”

She demonstrated breathing exercises and other SEL tools in mid-September during a four-day mindfulness conference at the school with author, Harvard lecturer, and mindfulness expert Christopher Willard.

“Since the program was launched, there has been tremendous interest across the community to extend a mindfulness and SEL program into both [the] middle and upper school[s],” Randal Rhodus, head of the lower school, said. “We are currently walking down that path and navigating next steps.”

So far, the response has been positive.

“Challenges with concentration and ADHD are both growing issues,” Rhodus said. “It seems evident that our contemporary culture is filled with reasons to be distracted.”

With even the youngest facing constant stimulus from media, communications, and other sources, “it makes sense that finding attention and focus would be more challenging than before,” Rhodus said.

Sunshine said mindfulness benefits brain health. “In a school setting, mindfulness has been shown to not only promote better focus and concentration, but also decrease stress and anxiety, increase empathy for others and improve self-management and self-awareness,” he said.

The yoga center has worked with several area schools to bring this approach to the learning environment. Rhodus said Hockaday students have reported finding more inner calm and the ability to focus better.

“Parents have also shown great support for the program and are regularly the ones that are reaching out to Dallas Yoga Center to bring it into new schools,” he said. “When it comes to students, it seems that the pressure cooker can be a factor whether you’re in an underserved school or in the most esteemed independent schools.

The reasons for these stressors range widely from food insecurity and highly challenging family situations to performance pressure and heavy time demands.”