COPPELL — An 11-point run that lasted between the first and second set doomed Highland Park in a season-ending loss to Prosper on Thursday.

For the second straight season, Highland Park drew an early playoff matchup with Prosper, a traditional power and the second-ranked team in the state. It was close early, but mistakes late in the first set were the difference in a 3-0 loss, 25-21, 25-13, 25-16.

“Against a team of that caliber you can’t make mistakes like that,” said Highland Park head coach Michael Dearman. “We had a good start, but the mistakes here and there late in that first set really carried over and hurt us the rest of the match.”

Trailing 22-19 in the first set, Highland Park cut the lead to 22-21 before the Lady Eagles (41-6) scored three straight points to end the set. In the second set, the Lady Scots looked out of sorts as Prosper scored the first eight points and took control of the middle stanza.

“When we couldn’t finish in the first, that really hurt us, and you saw that in the second,” Dearman said.

Prosper closed out the second set with a six-point run, and then carried its momentum into the third set, where it never trailed after the set was tied at 4-4.

It was the final game for talented senior class for the Lady Scots (27-19), including Berkley Hays, Scottie Wells, Chandler Stark, Sarah Reedy, and E.C. Stanzel.

“I’m very proud of what that group did. They were leaders all season and a big part of this team and program,” Dearman said.

The Lady Scots will have 10 players returning next season, and it’s a group that Dearman said will learn from this experience.

“It’s just tough when you get a team like [Prosper] this early,” he said. “We have a good team and they played well. It’s just a tough matchup and you can’t make some of the mistakes we did against that team.” 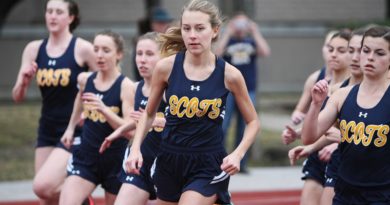