If Highland Park looked like a team that had been there and done that, it’s because the Scots had been to the UIL state team tennis tournament plenty of times before. And they brought home titles from the majority of those trips.

On Thursday, HP added its state record 18th championship in program history, capping an undefeated season with a 10-2 win over Amarillo in the finals of the Class 5A bracket in College Station.

The Scots (23-0) opened the match by winning six of seven doubles points and never looked back. Madison McBride and Annika Juergens picked up straight-set wins in girls singles, while Cole Burnam did the same for the boys.

It was the type of dominating team effort that personified HP’s season. Boys, girls, singles, doubles — the Scots were equally strong in all phases, even against the top programs in Texas.

On Wednesday, the Scots didn’t drop a set during an 11-0 win over A&M Consolidated in the semifinals. After sweeping the doubles matches, HP netted singles victories from Quinn, Commer, McBride, and Krueger. 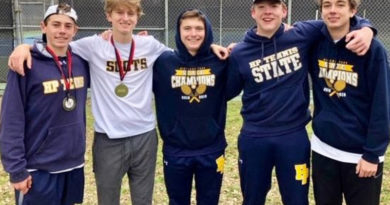