Highland Park already has clinched the District 15-5A title — the 50th district championship in program history, by the way — and the league’s top seed in the 5A Division I playoff bracket.

Yet there’s some unresolved business when the Scots host Wylie East in the regular-season finale on Friday at Highlander Stadium.

The Pirates handed HP a 20-9 loss a year ago, which gave the Scots multiple regular-season defeats for the first time in almost two decades. Then again, perhaps it provided a wake-up call heading into a postseason run that led to a state championship six weeks later. So who knows?

Still, the Scots (8-1, 6-0) should have some motivation beyond the usual playoff tuneup against the Raiders, who haven’t been anywhere near the playoff-caliber squad from last season.

Looking ahead to the playoffs, the Scots will face Texarkana (Texas) next week in the Region II bi-district round. The time and location are yet to be finalized.

HP extended its winning streak to eight games last week with a 45-15 drubbing of Royse City. John Stephen Jones threw five touchdown passes, including three to Cade Saustad, as the HP offense continued its stellar form. Jones has thrown 33 touchdown passes with just two interceptions this season, and has completed more than 70 percent of his attempts. Scoring leaders for the Scots are Saustad, Finn Corwin, and Paxton Alexander with eight touchdowns apiece.

Meanwhile, the HP defense shut out in the Bulldogs in the first half and has allowed more than 17 points only once in six district games.

Wylie East has struggled this season without standout rusher Eno Benjamin, who’s now at Arizona State. The Raiders (2-7, 1-5) snapped a six-game losing streak last week with a 50-43 victory over Forney.

Corbin Johnson has been the primary offensive threat for Wylie East, rushing for more than 1,500 yards and 21 touchdowns. He also has thrown a scoring pass and caught one, too. The remainder of the offense, led by sophomore quarterback Zack Haaland, has combined for just nine offensive touchdowns. 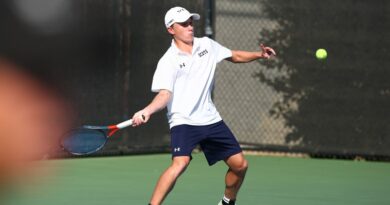 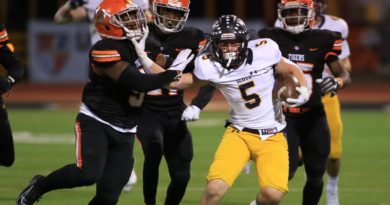 6-5A Crown at Stake for Scots in Finale