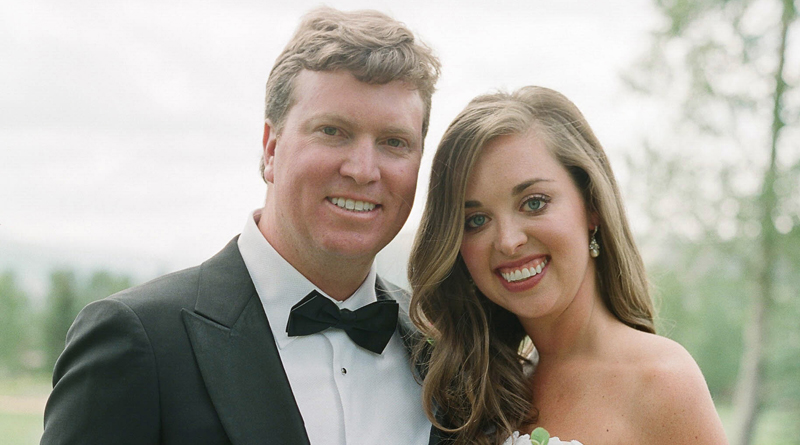 Julia “Julie” Elizabeth Harding and Brian Scott Woidneck were married at six o’clock in the evening on June 17, 2017 at the Roaring Fork Club in Basalt, Colorado. The couple was married in an outdoor ceremony officiated by Dr. Bryan Healy Dunagan, Senior Pastor of Highland Park Presbyterian Church. A tented reception followed, including a seated dinner and dancing to the Denver band, Tunisia.

The couple’s first dance together was to Michael Buble’s version of the James Taylor original, “How Sweet It Is.” Bluebird Productions of Aspen, Colorado, coordinated the details of the wedding and reception. Laura Murray Photography was the photographer and Elysium Productions was the videographer. Brightly colored florals in magenta and coral were designed by Bare Root Flora. The four-tier golden velvet cake, layered with fresh strawberries and decorated with flowers, was provided by d’Elissious.

>The bride was given in marriage by her parents and escorted down the aisle by her father. For her wedding, Julie wore a strapless blush Ramona Kaveza gown with white ribbon lace from Warren Barrón. She carried a lush and overflowing bouquet of magenta, blush, coral and greenery. Julie’s hair was done by Meghan Fisher and her make-up was done by Vanessa Vieni.

The bride is a graduate of Highland Park High School. She received a Bachelor of Business Administration in finance from Baylor University. Julie is an executive director in the Commercial Bank at JPMorgan Chase Bank in Dallas.

The groom is a graduate of Brea Olinda High School in Brea, California. He received a Bachelor of Science in business administration from the University of Southern California. Brian is a co-founder and principal of StoneHawk Capital Partners.

Following their honeymoon trip to southern Italy, the couple have made their home in Dallas.