Most of Highland Park’s current players were just starting elementary school when the Scots and Texarkana (Texas) High were regular playoff rivals more than a decade ago.

They met for three consecutive years from 2004 and 2006, and will renew acquaintances on Saturday in a Class 5A Division I Region II bi-district game at the Ford Center at The Star in Frisco.

Texas High knocked HP out of the playoffs in 2004 and 2006. But the last time the two teams played one another in the first round, the Scots won a hard-fought 38-31 contest on their way to a state title.

Obviously, HP wouldn’t mind seeing a repeat of that script this time around, as it attempts to start a repeat run to a state championship after last season’s triumph. The Scots (9-1) bring a nine-game winning streak and a District 15-5A title into the matchup in addition to that postseason experience from a year ago.

HP has been rolling on both sides of scrimmage. The defense has allowed just 12.2 points per game in the past five weeks. The Scots won all seven of their district games by margins of at least 19 points, and have been held under 30 points just once this season.

John Stephen Jones has thrown for more than 2,600 yards with 38 touchdowns and only two interceptions — none in his past seven games. The offense has plenty of weapons, including Cade Saustad (who has five touchdowns in his last two games), Paxton Alexander, Conner Allen, and Scully Jenevein.

Meanwhile, the Tigers (7-3) are making their 17th consecutive playoff appearance, but haven’t gotten out of the first round since 2009. After going 10-0 last season, they were upset by West Mesquite in a bi-district game.

Texas High is led by first-year head coach Gerry Stanford, who took over for Barry Norton prior to this season. The Tigers have won five straight games after a slow start, averaging 43.6 points per game during that span. They finished as the runner-up behind Marshall in District 16-5A.

Among the top playmakers for the Tigers are receiver Tevailance Hunt, who has verbally committed to TCU, in addition to quarterback Riley Russell and running back Chris Sutton.

The winner of Saturday’s game will meet either Frisco Centennial or McKinney North next week in the area round. 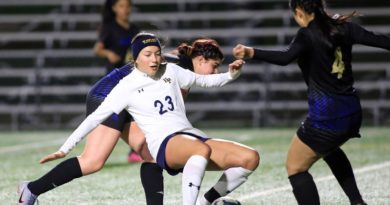 Terrific Start for Lady Scots in 11-5A