If the past three weeks were a dress rehearsal of sorts, Friday should better reveal the challenges of December playoff football for Highland Park.

The Scots will face Mansfield Lake Ridge in the Class 5A Division I Region II final at AT&T Stadium, likely its toughest hurdle so far in their quest to repeat as state champions.

After all, the teams sport identical 12-1 records, and have each won 12 straight after an opening loss to a Class 6A opponent. Both squads feature high-powered offenses and hard-hitting defenses. And both have recent experience with deep postseason runs.

The question likely is whether Lake Ridge has an answer for the HP offense, which has looked unstoppable during the past several games. The Scots have averaged more than 60 points per game during the first three rounds of the playoffs. Last week, they earned the 100th postseason victory in program history with a 52-20 thrashing of Mansfield Summit.

All season, HP has been led by the terrific play of quarterback John Stephen Jones, who arguably has put together one of the greatest seasons for a signal-caller in school history. His statistics put him on pace — if the Scots keep winning — for one of the most impressive campaigns in state history, too.

Jones has completed 72 percent of his throws, and has 52 touchdown passes with just four interceptions in 13 games. He needs just 221 passing yards on Friday to reach the 4,000-yard mark for the season. And he’s also ran for seven scores. Keep in mind that last year, in 16 games, Jones finished with 3,054 yards and 29 touchdown passes.

Of course, he has a stellar supporting cast that includes Cade Saustad, who has 63 receptions for 1,234 yards and 16 touchdowns. Paxton Alexander has more than 1,500 all-purpose yards out of the backfield, with 12 total scores. Conner Allen and Finn Corwin also have double-digit touchdowns.

HP grounded the Eagles 41-27 in the regional semifinals a year ago, then earned the state title three weeks later. However, this Lake Ridge team has more similarities to the state runner-up from 2015 than it does to last year’s squad.

The Eagles rushed for 404 yards during a 38-28 win over Prosper last week. Cartraven Walker rumbled for 250 yards and four touchdowns on 23 carries. He surpassed 1,000 yards for the season.

The winner of Friday’s game will face either Denton Ryan or Lubbock Coronado in the state semifinals on Dec. 15 in Arlington. 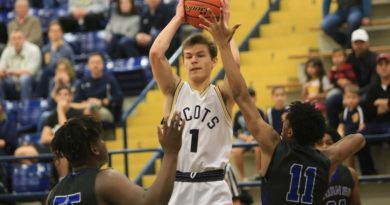 Scots Keep Rolling in 11-5A Play

Young Pitches With a Purpose for Royals