Ronald McDonald House of Dallas (RMHD) thanked the chairs and sponsors of this year’s The Trains at NorthPark, presented by Bank of Texas, at the Highland Park home of Lindsay Billingsley. The Trains at NorthPark is a beloved holiday attraction that draws about 75,000 visitors each year and provides the largest source of funding for RMHD. This year’s Honorary Chairs are Dr. Dale Fuller and his wife Jean Fuller.

Dr. Fuller, a radiation oncologist, is a long-time supporter and founding board member of RMHD, which has provided a home-away-from-home for families of seriously ill or injured children since 1981. The 2017 co-chairs for The Trains at NorthPark are Hollee Hirzel and Bridget Miller.

Original kid conductor, Amy Maggard of Plano, was also at the event. She is now a nurse and mother of two, who still has the scrapbook she made during her stay in 1987 at RMHD, as well as from her time as Kid Conductor.

Wilkinson Center Kicks Off with a “Can Do” Spirit 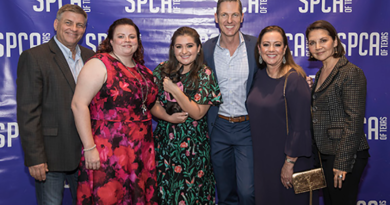