This season will launch a new era for the Highland Park lacrosse program, although the new man in charge is a familiar face.

Rich Moses is the new Division I head coach after serving as an assistant coach at the Division II level for HP during the past few seasons. He replaces Derek Thomson, who retired following the Texas High School Lacrosse League state tournament last spring. Thomson won seven state titles during his 14-year tenure that turned the Scots into a perennial powerhouse.

Moses, who started with HP as a youth coach in 2008, takes over a D1 program that remains a perennial powerhouse. After winning the state championship in 2015, the Scots were the runner-up in 2016 and reached the state semifinals last May before falling to eventual state champion Jesuit.

Moses will inherit a roster that includes several members of the HP football team that won its second consecutive Class 5A Division I state title in December — among them Cade Saustad, Paxton Alexander, Scully Jenevein, Andrew Stanzel, and Cameron Reeves. Saustad has committed to play college lacrosse at Virginia, while Alexander will head to Utah.

Moses is the director of HEADstrong Lacrosse Club of Texas and one of the organizers of the annual Patriot Cup event, which brings together top college and high school teams for a daylong showcase that raises funds for the HEADstrong Foundation, earmarked for cancer research and treatment.

As a player, the New York native was a standout at Hobart College during the 1980s. As a coach, he received the 2015 HEADstrong Relentless Spirit Award, the 2015 THSLL D2 North Assistant Coach of the Year award — after helping HP win a D2 state title — and the 2016 THSLL Person of the Year award.

The Scots will open the season on Feb. 16 against IMG Academy from Florida as part of the Patriot Cup in Frisco. They also will head to southern California for three games during spring break before closing the schedule against some traditional local rivals. 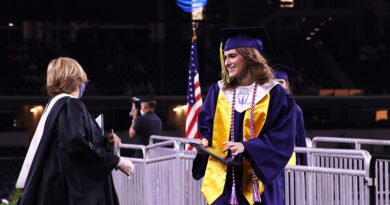 Celebrating the HP Class of 2020