After two straight narrow losses to District 15-5A playoff contenders, Highland Park surged to a 62-44 victory over last-place Wylie East on Tuesday.

It wasn’t easy, however, as the Scots (19-10, 8-4) had to rally from a 10-point halftime deficit. They outscored the Raiders 40-12 in the final two quarters. Will Enzor led all scorers with 24 points, marking the fifth straight game in which he’s paced the HP offense, and Cade Wagner added 15.

The win help to ease the sting of a 51-49 road loss to district leader Royse City on Feb. 2, a game that HP led in the fourth quarter.

With two games remaining, the Scots are alone in third place in the 15-5A standings, and can clinch a playoff spot with a win over Lovejoy in their home finale on Friday.

Scots Pound Lovejoy in 15-5A Opener 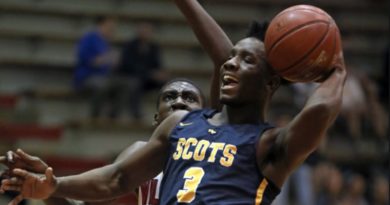 Up to 11: Scots Extend Winning Streak