After a three-game winning streak to close the regular season, Highland Park is still aiming to improve its playoff seeding.

The Scots (21-10, 10-4) defeated North Forney 82-67 on Tuesday, meaning HP is knotted with Forney for the runner-up spot in the District 15-5A standings. Since the two teams split their earlier meetings, they will play a tiebreaker game for the district’s second playoff seed at 7 p.m. Friday at Mesquite Poteet.

The winner of Friday’s clash will face Texarkana Texas High in a bi-district game next week, while the loser will take on Mount Pleasant at a time and location to be determined.

The Scots had four players in double figures on Tuesday while pulling away from the Falcons in the second half. Will Enzor led the way with 17 points, followed by Cade Wagner with 15, Alex Staffaroni with 12, and Finn Corwin with 10.

Enzor has paced the Scots in scoring in each of the past seven games, including a 25-point effort during a 61-43 victory over Lovejoy on Feb. 9. 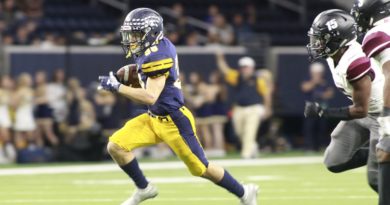