Conner pinned Fulshear’s Alexander Torres in the championship match of the 195-pound weight class on Saturday at the Berry Center, putting himself in exclusive company in HP’s storied history.

“That’s a great accomplishment for Aidan,” said HP head coach Tim Marzuola. “We’ve only had a handful of kids that have won two here at Highland Park. Aidan has quite a streak going. He’s on his way to set a bunch of career records at Highland Park for sure.”

While the 11-2 score prior to pinfall would say Conner’s championship match was easy, it didn’t start that way. Torres went up 2-1 after scoring a takedown. Conner, who started wrestling in fifth grade after training in jiu-jitsu, said he knew what he needed to do.

“First, when I got taken down, I said I’ve got to get an escape right now,” Conner said.

“Near the end of the match, I told him we needed another takedown to get a major because it would help us for team points,” Marzuola said. “He looked at me and shook his head. After he took the kid and pinned him down, he looked at me and asked, ‘Was that a good enough takedown for you coach?’ I said, ‘Yeah, that’ll do.’”

“I’ve been leg-riding for a long time. It’s definitely one of my better moves,” Conner said. “It gets me a lot of points and is a good way to wear the opponent out a lot.”

Five other HP wrestlers also competed at the state tournament, and two of them advanced out of the first round. Caleb Kimzey finished in fifth place at 152 pounds.

“They’re starting to come together as a team,” Marzuola said. “They aren’t where I’d like them to be quite yet, but that sometimes takes years to get that mentality of working through one another and feeding off each other. The only senior this year was Caleb, and Caleb was just exceptional in this tournament. He fell one round short of placing last year, so he was bound and determined to make it on the podium this year.”

The Scots finished in a tie for seventh place in the team standings with Justin Northwest, scoring 44 points. Jeremy Hanes and Colby Hopkins also scored victories during the tournament.

Conner hasn’t lost a match since December 2016. He’s 114-1 in the last two seasons, with more than 150 career victories. The reasons are mental as much as physical.

“When I walk out there for any match, I know I put in more preparation than the other guy,” Conner said. “I’ve worked harder, and I know I’ve been working harder for longer. Any time I step on the mat, I know I can win. I know I can become undefeated.” 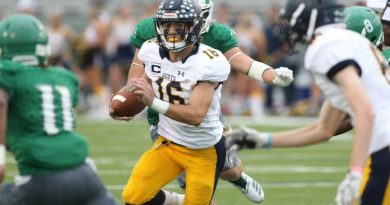