FLOWER MOUND — Highland Park’s season-long repetition of injuries and roster adversity finally caught up to the Scots on Friday.

Playing shorthanded once again, HP fought valiantly before state-ranked Little Elm rallied for a 64-57 victory in a Class 5A Region II area round playoff game on Friday.

The Scots (23-12) started fast and led by as many as 15 points in the second quarter — thanks in part to hot shooting by Alex Staffaroni — before the Lobos (28-7) turned up their defensive intensity and surged ahead behind standout sophomore R.J. Hampton.

“We had them somewhat surprised,” said HP head coach David Piehler. “We came out strong, but they’re a quality team.”

HP was forced to use its 12th different starting lineup this season, and just six players saw significant minutes. One of those was Dillon Powell, the only player to appear in all 35 games for the Scots. Leading scorer Will Enzor, who played during Tuesday’s bi-district victory over Texarkana Texas High, was in the bleachers on Friday.

“We’ve never had a game where we had everybody,” Piehler said. “The ones who played, battled. I was so proud of them. We made mistakes but we left it all on the court.”

The lack of depth became apparent in the second half against the Lobos, who likewise used a thin bench but remained aggressive in the paint and dominated the boards. Once HP’s outside shooting went cold, the scrappy Scots couldn’t respond.

HP gained an early advantage thanks to a deliberate half-court offense with crisp ball movement that led to open perimeter shots. Staffaroni scored 13 points during a six-minute span in the second quarter to extend the lead to 31-16.

“We came out and we panicked in the first half, and we can’t do that,” said Little Elm head coach Rusty Segler. “They made their shots. It was a wake-up call.”

The Lobos responded with a 15-1 run that stretched into the third quarter. Hampton’s jumper with 3:20 left in the third tied the game at 35. The Scots managed just three points in the pivotal quarter.

“Their defense ramped up,” Piehler said. “They put more pressure on us and we took quicker shots in the second half.”

Hampton finished with 29 points and a game-high 11 rebounds. Javian Williams, the primary perimeter shooting threat for Little Elm, connected on four 3-pointers and tallied 16 points to go with five assists. As a team, the Lobos held a 31-20 edge in rebounds.

Staffaroni was the only HP player to reach double figures with 29 points, including five treys. Cade Wagner contributed eight points and Powell had seven. Finn Corwin finished with five points and a game-high seven assists.

While this season is over for the Scots, the future could be bright. Of the players who saw significant minutes on Friday for HP, only two — Staffaroni and Wagner — are seniors. 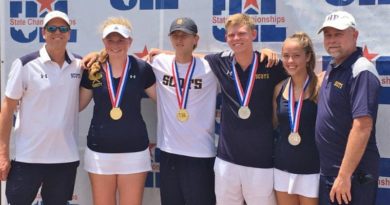 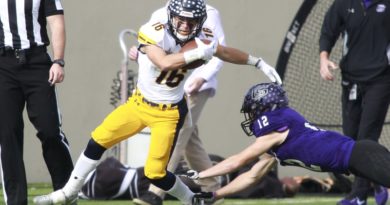 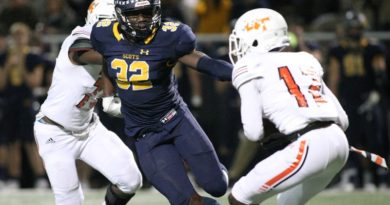