The scene was set at the launch party for AWARE Affair Celebrate the Moments – A Modern American Evening at The Statler’s Bourbon & Banter as guests were greeted by a 1946 Lincoln and a 1957 Chevrolet Bel Air at the entrance.

More than 75 supporters and members of the host committee gathered in the high-style surroundings and enjoyed a signature cocktail, wine and hors d’oeuvres.

Venise Stuart, AWARE’s president thanked everyone and revealed some history about AWARE which began in 1989 when five very involved and powerful Dallas women founded the organization in support of their good friend who was suffering from Alzheimer’s. Those five women were the late Ruth Sharp Altshuler, Cyndy Hudgins, Nancy Nelson, Evelyn Ponder, Billie Leigh Rippey and Anita Sampels. At least 100 of their friends stepped up to join the organization, some of whom attended this evening.

AWARE Affair celebrates two honorees. The first is BvB Dallas: BvB Dallas is a Dallas-based charity organization that hosts a powder-puff football game and other fundraisers as a way of raising money for Alzheimer’s disease research and awareness. Founded locally by a group of young women driven to find a cure for Alzheimer’s, BvB Dallas is a personal way for young professionals across DFW to raise awareness, funds and support to TACKLE ALZHEIMER’S FOREVER. Raising more than $3.5 million and recruiting over 1,000 volunteers for the cause, BvB Dallas has made a huge impact in the Metroplex over the past 10 years.

The second honoree is the Chantilis Family, in honor of their mother, Frances Chantilis. Frances was one of the original charter members of AWARE. Frances was a kind, gentle, woman, who gave to everyone in the community. Unfortunately, Frances lost her own battle of Alzheimer’s in 2013.

Slated for April 13, AWARE Affair Celebrate the Moments – A Modern American Evening will be held at The Statler, the newly-renovated historic hotel. 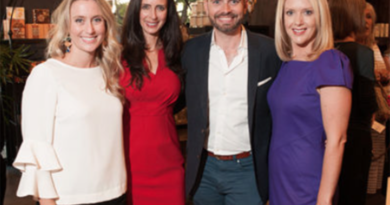