Shirley, Murphy and Matt, grandchildren, great-grandchildren, and all Governor, former governors, Senators, Congressman. Laura sends her best. And I am honored that you have invited me here today to help celebrate the life of Zell Miller – a great American. You know, on the way over here, I was just thinking about how many Governors of Georgia – or anywhere – had three Presidents eulogize at their funerals? (Laughter.) He was really one of a kind.

I first met Zell in the early 1990s, when we were both governors of southern states. We came from different backgrounds, but we hit it off because had some things in common. We shared a belief in the importance of public education, we had a willingness to work across the political aisle, and we loved baseball. (Laughter.) In fact, the man once known as Zip Zell for his speed on the base paths said his real dream was to be a big league shortstop. Thankfully God made him a shaky hitter (laughter) so he could find his calling in the big leagues of politics. Zell Miller became one of the great governors in the history of Georgia and was a principled member of the United States Senate. He was a man of honor and a faithful friend. In 2004, Zell Miller stood up to speak for me. Now it is my honor to speak for him.

Zell was born 86 years ago to his mother Birdie and father Grady, the dean of the local college and a state senator. Tragically, Zell’s father died just 17 days after he was born. We can just imagine their heavenly reunion, when Grady asks his son what the past 86 years were like. I can hear Zell saying, “Daddy, have I got a story for you.” (Laughter.)

The story starts with Birdie, Zell’s mother. She built a house with rocks that she pulled from a nearby creek and worked tirelessly to support her children. As Zell once put it, “My mama didn’t just do the best she could; she did the best anyone could.” She instilled in Zell the promise of America, and the drive to do his best. As Zell often remembered, she would point to the one paved road that led out of their mountain town, and say, “You know what’s so great about this place? You can get anywhere in the world from here.”

At age 21, Zell took that road to Parris Island to become a member of the United States Marine Corps. He said the experience made him into the man he became. He learned a lot; one of the things he learned was to be punctual. As his staff can tell you, Zell Miller was never late for a meeting. That includes a meeting at Young Harris College in the summer of 1953, when he asked Shirley Carver to square dance. They were married a few months later – and for the next 64 years this strong woman was a rock by Zell’s side.

Shirley helped cultivate some of Zell’s diverse interests — and she just tolerated some of the others. (Laughter.) He was a country music fan who loved the rodeo. His favorite restaurant was Waffle House, but he also quoted Shakespeare and Byron and listened to Mozart. He once attended the Atlanta Opera in a tuxedo top and blue jeans. (Laughter.) His mother was a painter who told him that art was “the signature of the human race.” He and Shirley developed a large collection of art and music, much of which he has donated to Georgia museums.

Zell followed his father’s footsteps into politics – a decision I know something about. (Laughter.) He was elected mayor of Young Harris, state senator, and four times as lieutenant governor. In 1990, the people of Georgia made Zell their governor. Nobody was better prepared for the job. At an inaugural reception at the governor’s mansion, a guest told his new governor, “I’ve been waiting out there for 45 minutes.” Zell said, “Man, I’ve been waiting for 16 years.” (Laughter and Applause.)

Governor Miller did a lot of great things for Georgia, and the people took note. When Zell finished his second term as governor, his approval rating stood at 85 percent. Take it from me, that’s not typical for a politician leaving office. (Laugher.) After decades of public service, Zell returned to teaching. But when Paul Coverdell suddenly died, Zell answered the call to serve out the rest of his term in Washington. I was elected President a few months later in what was not exactly a landslide. (Laughter.) I was eager to get some things done, and I wanted to find some Democrats to work with. Thankfully, I found Zell. We worked hard on education reform and tax relief. While Zell was always a Democrat, he was never an ideologue. As he put it, “You won’t find average Americans on the left or on the right. You’ll find them at K-Mart.” (Laughter.)

After the horror of September 11, 2001, we became a Nation at war. There was never a doubt where the Marine from the Georgia mountains stood. Zell was a steadfast supporter of our troops and measures to protect our homeland. In 2004, Zell announced that he would support my re-election, and offered to endorse me at the Republican convention in New York if I thought it would help. (Laughter.) Darn right it would help, I told him. (Laughter.) Because Zell had also spoken at Bill Clinton’s 1992 convention, he became the first person in American history to deliver the keynote addresses at both parties’ conventions. At mine, he electrified Madison Square Garden with his folksy, forceful speech, including his unforgettable line asking how America’s Armed Forces could be expected to defend our nation with spitballs. (Laughter.) He also reminded the country about Wendell Wilkie, a Republican presidential nominee who supported Franklin Roosevelt’s military policy. Wilkie said that if he had to choose between an epitaph that said “here lies a president” and one that said “here lies one who contributed to saving freedom,” he would prefer the latter. Zell asked, “Where are such statesmen today?” The American people had to look no farther than Zell Miller.

After the election, many politicians would have asked for a something big in return for their support. Not Zell. He did eventually tell me that he would like to serve on the American Battle Monuments Commission, a government agency charged with maintaining military gravesites. As Zell put it, “I’m just an old man looking after cemeteries.” (Laughter.) That was typical of Zell, a humble man who put service above self. He never forgot where he came from, or where he was headed. As he said in his Senate farewell, “Everywhere I’ve ever been really was on my way back home.”

Shirley and members of the Miller family: Thank you for sharing Zell with us. His life is a testament to all that is good, and all that is possible, in this country we love. There will never be anyone like Zell Miller. And he leaves an example that we need more of our political leaders to follow. He lived out the Marine Corps creed, Semper Fidelis – always faithful – faithful to our country, faithful to his family, faithful to his faith. Now the boy from the little rock house has reached the top of the mountain. And we know that he is home. May God bless you all. 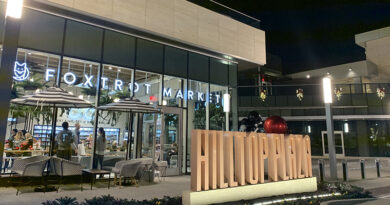 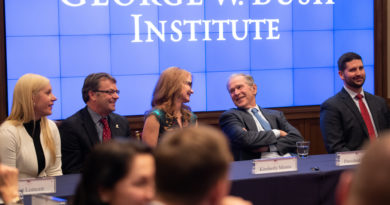