The Perot Museum of Nature and Science is set to unveil its first completely transformed exhibit hall since its 2012 opening more than five years ago. We joined fourth-grade students from Uplift Luna Preparatory for an exclusive tour today.

If the “ooh’s and ahh’s,” the “this is so cool,” and the “I want to be a scientist” comments that rang out from the children – and a few adults – aren’t enough to explain how amazing the renovated Being Human Hall is, let me tell you a lot more about it.

Now, if you’ve been to the interactive exhibit before, imagine it twice as a big with several new hands-on pieces that make learning about the human body fun.

The fresh and invigorated content centers on research and discoveries spanning from the days of early ancestry to modern-day characteristics to the scientific breakthroughs of local Nobel Prize Laureates. Not to be missed is a virtual-reality experience that puts visitors in the middle of a South African cave where internationally acclaimed paleoanthropologist Dr. Lee Berger recently identified a new species of the human relative, Homo Naledi.

The children were lined up the entire time to witness her virtual findings.

“The transformation of Being Human Hall delivers on some commitment museum leaders made early on – to keep visitors curious and engaged with scientific content that is fun, topical, and compelling,” said Dr. Linda Silver, Eugene McDermott Chief Executive Officer of the Perot Museum. “We believe guests will be thrilled with the captivating design, the ‘must-be-touched’ bilingual content, and the cutting-edge exploration of a universally popular topic – ourselves.”

The central theme that guides the exhibit is that the story of you begins with your ancestors; it travels through your DNA; it is held in your hands; it moves as you walk; it is heard through your voice; it is written in your brain – all things that are emphasized in one way or another at the exhibit.

Visitors will encounter everything from a preserved human brain and spinal column to a vein viewer to a “true mirror” that reveals how others perceive them. Guests also will be able to see their voices, test their agility and hand-eye coordination through a large-scale “Operation game-style” buzz wire activity – not to brag, but I totally rocked this one – and try on a prosthetic running blade.

Silver said the decision to renovate the Being Human Hall first was twofold. One, because it has always been one of the most popular exhibits at the museum, and two, because of how rapidly science changes.

“In this hall, in particular, it helps you think through your obligation and your responsibility to staying healthy,” she said. “We hope that it inspires not just thinking about careers but thinking about our own selves and being the best healthies people, we can be.”

To appeal to today’s children, children who literally have the world at their fingertips, Silver said they went into the hall’s renovations thinking about what experiences they can offer that would be different from what children have at home.

“A lot of experiments you’ll see incorporate multiple people at a time, so you can come and have a conversation or a dialogue about it,” she said. “We really tried to think about what we could offer that they don’t have a home or on the web.”

Before the end of the year, Silver said the museum will launch two new connecting Centers for Excellence that focus on different content areas. The Center for Excellence created in relation to the hall is the Center for the Exploration of the Human Journey, which connects to the work Dr. Berger and 150 scientists around the world are doing in the state of human origins.

The Center, Silver said will allow the museum to become a place that develops teacher professional development, school curriculum, and educational outreach for visitors.

“It’s an area where we as a museum can uniquely distinguish ourselves from other museums in the United States,” she said.

This Saturday, genetic testing company 23andMe will join the museum in celebrating the unveiling of the Being Human Hall by helping them break a world record for the most ancestry tests conducted at one time and place. (read more about that here.) 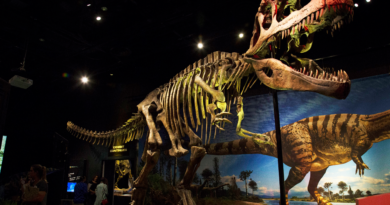 Being Human at the Perot Museum of Nature and Science