SKULDUGGERY OF THE WEEK: OUT OF TIME

A Highland Park man dealing Rolex watches from his house in the 3600 block of Harvard Avenue found himself down nearly $70,000 after a truly unique experience. Apparently, he received an inquiry from a  friend and frequent business colleague’s about an “interested buyer.” After receiving a check via UPS, the watchman shipped out two Rolexes to a Washington D.C. address. Turns out his friend’s email was hacked and the check wasn’t real, he reported to police around 10 a.m. May 8.

A Highland Park man, who lives in the 3500 block of Lindenwood Avenue, made the mistake of leaving a blue backpack on the top of his vehicle when leaving Love Field airport around 1 p.m. The bag, initialed AKH, contained a checkbook, Bible, and two cashiers checks totaling $12,000.

A homeowner reported to police around 4:40 p.m. that on May 2 a package from Wildfox containing $246 worth of merchandise – two Hutton women’s sweaters, one seashell pink and the other clean white – was stolen from her front porch in the 3700 block of Crescent Avenue. Video surveillance showed a woman with long blonde hair and a medium build in the homeowner’s driveway around the time the package was stolen.

Talk about watching something go down in slow motion: While sitting inside his home in the 4400 block of Edmondson Avenue, a homeowner watched as a small gray vehicle with Oklahoma plates stop in front of his neighbor’s house, the passenger, a thin man possibly in his 40s, get out of the vehicle and run through his yard to his front porch, and then dash back to the vehicle with a package in hand. The 4:20 p.m. thievery just so happened to get a Mother’s Day present sent to the Highland Park couple from one of their children: a candle with some family photos.

Stolen before 6 a.m.: $700 worth of tools from inside a 2018 gray Chevrolet Silverado parked overnight in the 4400 block of Glenwick Lane.

SUV’s continue to be targeted for parts in the Park Cities:  The third-row seat, valued at $500, was stolen overnight before 6:45 a.m. from a 2007 silver Chevrolet Suburban parked in the 4400 block of Larchmont Avenue. Another third-row seat was reported stolen during the same time period from a 2012 brown Chevrolet parked in the 4000 block of Glenwick Lane. The navigation system, valued at $1,500, was stolen sometime between Friday and 7:45 a.m. Monday from a 2012 tan GMC Yukon parked in the 4500 block on Stanhope Drive.

A former Highland Park High School student was issued trespass warning around 9:10 a.m. at the school in the 4200 block of Emerson Avenue.

Not cool, whoever you are. Someone drew two phallic drawings on a fence in the 3400 block of Purdue Street sometime between 11 p.m. May 6 and 6:13 p.m. Monday. The damage, the monetary damage, was reported as $80.

A customer suspected of stealing merchandise from the CVS in the 3000 block of Mockingbird Lane was issued a criminal trespass warning around 5 a.m.

An 18-year-old University Park man was arrested in the 4400 block of Emerson Avenue on suspicion of possession of marijuana. The time of arrest wasn’t included in the report.

Stolen before 8:10 a.m.: about $16,000 worth of kitchen appliances from a locked house under construction in the 3500 block of McFarlin Boulevard.

Sometimes you just have to do laundry and don’t have time for silly stuff like paying for the detergent. At least that’s what happened around 6:20 p.m. at a CVS in the 3000 block of Mockingbird Lane.

A University Park man was arrested around 8:40 p.m. for driving while intoxicated after crashing in the 3400 block of Daniel Avenue.

A 49-year-old University Park homeowner reported to police around 10:20 a.m. that sometime within the last month someone shot at her AC unit in the 3300 block of Southwestern Boulevard, rendering it inoperable. The damage was estimated at $2,500.

Arrest Made in Sexual Assault Case 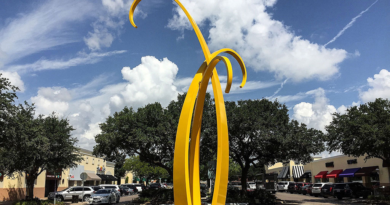