I have a confession to make.

As a Dallas vegan, my favorite restaurant isn’t Spiral Diner & Bakery, V-Eats, or El Palote. It’s Blue Sushi Sake Grill. Yeah, at first mention I am sure that sounds wrong – but trust me, it’s 100 percent accurate.

Back in the day, BV (before vegan), getting sushi with my girls was one of my favorite ways to spend a long lunch or a Friday night. That obviously changed when I stopped eating fish. And while I’ve been able to find options at restaurants since, nothing really felt worth it. Until I met Blue Sushi Sake Grill.

After hearing about the restaurant on the North Texas Vegans Facebook group, I asked my friend Rosanne from Dallas CASA to meet at the Uptown location for lunch.

While I knew the restaurant had vegan options and a dessert “to die for,” I didn’t expect to see a menu filled with plant-based rolls. That just doesn’t happen at non-vegan restaurants.

Spoiler alert, the food was delicious.

A couple of months later, I got a press release about the restaurant’s new lunch specials and an invitation to go to town on the menu – I accepted.

To fairly access the menu I also invited my colleague and fellow foodie Imani to dine with me at the Preston Hollow location.

Guests can choose from more than 32 maki rolls, including 11 vegetarian options and 22 nigiri/sashimi options. (The lunch specials are for dine-in only, Monday through Friday from 11 a.m. to 2 p.m.)

Now, when I said earlier that we were invited to go to town on the menu, well we did – no judgments please on the excessive amount of food I am about to mention.

We began our meal with an appetizer, the crispy Brussels sprouts. Had that been the only thing we ate that day, let me just tell you, I would have been one happy cat. The dish is absolutely delicious, perfectly browned and tossed in creamy lemon miso sauce and toasted cashews – totally drooling over here.

After that, I decided to get option three from the lunch special menu, the one maki roll and one order of sashimi, because I wanted to try the inari and because we also ordered a Cowgirl roll for the table (more about that later).

The inari was probably one of the best I’ve tried. The tofu was perfectly pressed, chilled and soaked in a sweet dressing. For my roll, I chose the Eden roll, which is packed with sweet potato tempura, grilled asparagus, and brown rice and topped with edamame hummus and sundried tomato. It’s also rolled in soy paper.

I’ve never had sushi with brown rice before, and it totally changes the game.

Brown rice and the soy paper gave the sushi such a different flavor profile than your typical roll, which I liked – a lot.

The Cowgirl also was a table favorite.

It’s barbecue-flavored without the meat and packed with vegan tempura pickles, Sriracha-fried onion rings, and vegan mayo. To give it that extra flavor of the grill, it’s rolled in Barbecue paper. Did you know May is National Barbecue Month? So go get a roll, I’ll join you.

Imani – remember my friend, said the Cowgirl Roll reminded her of pulled pork, and then gracefully asked for the last piece.

To be honest, at this point I did feel my eyes begin to glass over as I entered into a state of being food wasted, but that didn’t stop me – or anyone at the table – from ordering the vegan chocolate torte from the menu.

It was so beautiful.

The chocolate ganache with coconut milk was soft and decadent. The layers of toasted coconut and cashews added to the richness is a lovely way, and the raspberry sorbet was DA BOMB! If you’ve ever had a raspberry truffle from See’s Candy, this is the desert version of that. But better.

BTW, to ramp up the excitement for the quickly approaching summer vacation (and give those who don’t get the luxury of one a taste of it), Blue Sushi Sake Grill has also launched a limited-time “Summer Vacationers” menu available throughout the summer.

The menu features a variety of seasonally-tied cocktails and menu items. The cocktails incorporated the chewy tapioca balls commonly found in the ever-popular boba tea to make their own iteration of Boba Cocktails including both a tonic and margarita variation. The limited time menu will also offer three specialty menu items such as a sashimi dish using beet-cured salmon, a maki roll with pineapple and mango salsa and a can’t-miss fortune cookie ice cream sandwich that guests will definitely feel fortunate for.

This Just in: 75230 Still Full of Mosquitoes 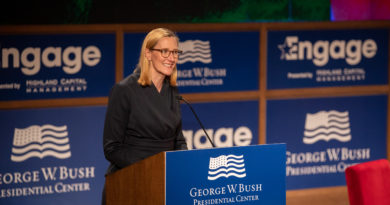 STEM To Play Key Role In the Future of Texas