NorthPark Center has announced that The Landscape Architecture of Lawrence Halprin, on view on Level One between Neiman Marcus and Dillard’s, has been extended until August 26 due to overwhelming interest in the exhibition.

Presented in partnership with The Cultural Landscape Foundation (TCLF), the exhibition highlights the life and work of one of the foremost landscape architects of the 20th Century. Halprin is also the original landscape architect of NorthPark. Patsy and Raymond Nasher relied on his expertise when the shopping center was built in 1965, resulting in iconic architectural elements such as the planters in Neiman Marcus Court and the octagonal fountain in Dillard’s Court.

Born in New York, Halprin moved to San Francisco following military service in World War II and graduate study at Harvard University. His career began in the office of vanguard Modernist landscape architect Thomas Church. He opened his own practice in 1949.

Halprin’s revolutionary work was set apart by strong, expressive forms that evoked the structures and processes of nature. He received numerous awards in his lifetime including the National Medal of Arts (2002), the nation’s highest honor for an artist.

He died on October 25, 2009, at the age of 93 at his home in Kentfield, California, just months after closing his office.

The Landscape Architecture of Lawrence Halprin was created in 2016 during the centennial of Halprin’s birth and debuted at the National Building Museum in Washington, D.C. It features 56 newly commissioned photographs of his works by leading landscape photographers, with subjects ranging from recently rediscovered residential projects created early in his career to the Franklin Delano Roosevelt Memorial in Washington, D.C. and the Stern Grove in San Francisco. 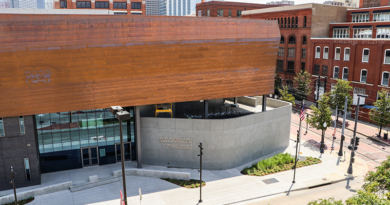