The architects working on plans for the rebuild of Hyer Elementary School already have nearly a dozen design options – six possible two-story designs and five three-story ones.

Jonathan Aldis, principal architect of Stantec, presented the options in May during question-and-answer session with residents held in Hyer’s auditorium. Highland Park ISD trustees also discussed the plans during a school board meeting the following day.

“Our goals for the school include larger classrooms, flexible learning spaces, appropriately sized core spaces, and dedicated on-site parking,” Aldis said. “We’ll also look at an increase in green space and an architectural compatibility with the city and neighborhood.”

That final point will be crucial when it comes to gaining community support, as keeping the architectural integrity of the school has been a hot topic within Highland Park since January; several meetings were held with residents regarding similar issues with Bradfield Elementary, which will also undergo a rebuild.

Both schools will undergo complete rebuilds as part of a bond package passed in 2015.

Notice of the Hyer question-and-answer meeting, which drew more than 100 people, went to residents within a 500-foot radius of the school, said Tom Trigg, Highland Park superintendent.

Representatives from the Hyer Elementary Legacy Committee have met with Stantec and offered several design recommendations, including red brick with white trim on the outside, a courtyard with plenty of shade from trees, and traffic flow that will allow students to cross surrounding streets safely. Aldis added that keeping the already ample amount of greenspace is a priority.

Trigg stressed that all design ideas for Hyer were still up for consideration, and that no final decision has been made yet for the school that has been in Highland Park for nearly 100 years.

He added that the plans were “not going to please everyone,” but that the final design will be focused on student and educational development.

“I think there’s a feeling in the community that decisions [for the school] have already been made, and they haven’t,” Trigg said. “The committee will do the best they can to pick a design that really meets the needs of the entire community, while focusing on the kids. We want to design these schools from the inside out.” 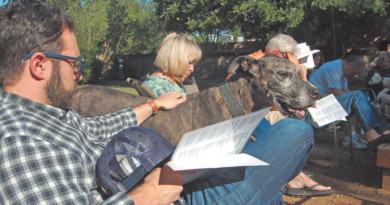 People, Prayer, and Pooches in the Park