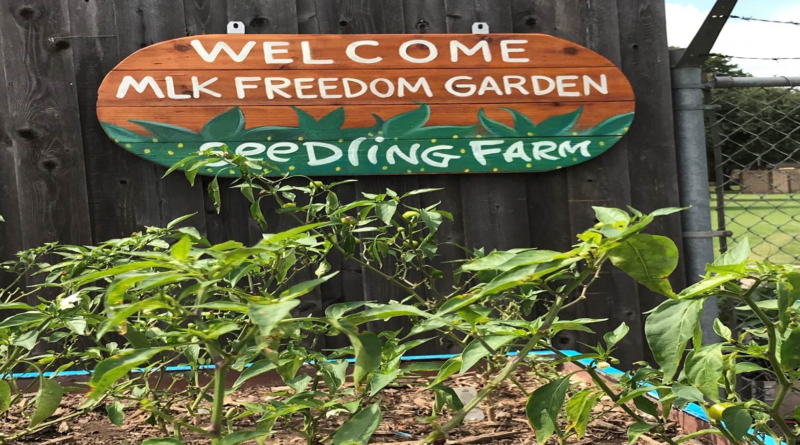 Tucked into nooks and crannies in South Dallas are flourishing community vegetable gardens with names like Sunny South, Mill City or Nella Roots. They provide fresh produce to residents in an area long burdened by poverty and urban blight.

But they remained mostly hidden to city officials and urban researchers until SMU graduate student DeVincent Martin set out to connect them to resources needed for success.

Martin will graduate May 19 from SMU’s Lyle School of Engineering with a Master’s degree in sustainability and development.

He began the community garden project as part of SMU’s efforts to combat the South Dallas food desert through the work of the Hunt Institute for Engineering and Humanity in the Lyle School of Engineering, and faculty member Lynch, a senior fellow and social entrepreneur in the Hunt Institute and associate professor of organizational communication at SMU Meadows School of the Arts.

“A food desert is a community without close access to fresh, healthy foods at grocery stores or other retail outlets, and in South Dallas, many residents live at least a mile away from a grocery store,” says Lynch, who is Martin’s mentor. “By finding and mapping these gardens we can help provide soil, seedlings, expertise, and volunteers.”

Martin brought a unique set of experiences to the task – family roots in South Dallas, a Bachelor’s degree in environmental studies and biology, an interest in urban agriculture and skills in Geographic Information System (GIS) mapping. GIS mapping is software that maps an area in multiple layers such as demographics, employment, retail outlets and – gardens.

As an SMU sustainability and development graduate student, he also was hungry for a topic to fulfill graduation requirements for a capstone project. But Martin soon learned gathering data by knocking on doors and asking questions was difficult in an area where local residents are wary of outsiders.

“South Dallas residents have been the subjects of years of questionnaires and surveys,” says Martin. “But the studies have not benefitted them directly. I had to re-establish trust before any mapping and data gathering could be achieved.”

Martin spent hours with South Dallas gardeners, answering their questions and understanding their concerns. He also shared why, at age 47, he was pursuing an SMU Master’s degree.

After graduating from high school, Martin enlisted in the U.S. Army, serving from 1989 -1993 with the 3rd Armored Division Infantry in Operation Desert Storm in the Gulf War. “We were bullet-catchers,” he says.

Martin returned home to Dallas after his discharge and worked in sales for 17 years, selling everything from cars to home mortgages.

When the VA declined to support Martin’s graduate education, SMU’s Lyle School of Engineering gave him a 50 percent tuition discount, part of the school’s tuition discount program for active military, military veterans and U.S. Department of Defense employees pursuing graduate degrees. He began graduate work at SMU in 2016 and was selected in 2017 to become a graduate research analyst in the Hunt Institute for Engineering and Humanity.

Martin saw firsthand the benefits of the South Dallas gardens as he conducted his research.

“There, the gardens are an asset, not a hobby,” he says. “They are helping people live. I watched kids get off the school bus and stop by the garden for produce to bring home for dinner.”

Community gardens are a step toward solving the food desert crisis in South Dallas, an area that sprawls from the Trinity River south to I-20. But economic development is also key to reviving the area, Martin says.

“You can only give away so much lettuce,” he says. “A food desert is a job desert,” Martin says. “South Dallas also needs sustainable business growth.”

After graduating, Martin plans to stay involved with SMU as an associate with the Hunt Institute. He also was named to the board of directors of Get Healthy Dallas. Martin recently accepted a job offer from Trammell S. Crow to work in partnership development for EarthX.

The “Cone Zone” Is Headed For SMU