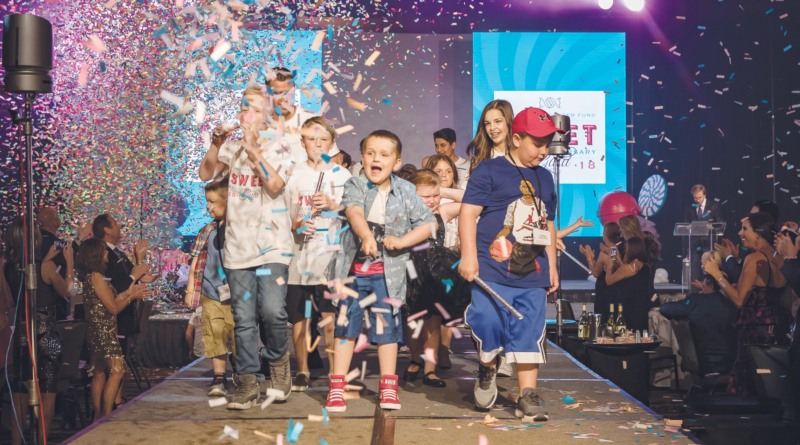 Over 1,200 guests, including 85 pediatric cancer patients, survivors and their families, celebrities, sponsors, and supporters, filled the first floor of the Hyatt Regency Dallas, transformed into a colorful, candy-themed wonderland, on April 27, for the most successful Children’s Cancer Fund Gala on record. The sold-out 30th annual fundraising gala raised more than $1.2 million to support pediatric cancer research and treatment programs at Children’s Health and UT Southwestern – surpassing fundraising goals for the second year in a row.

Longtime Honorary Co-Chair Roger Staubach, who has been involved all 30 years, began the event with a special announcement.

“This is the first year in this event’s 30-year history that Children’s Cancer Fund has not lost a child who has participated in this event,” said Roger Staubach. “For the first year, an in-memoriam video will not be shown at the gala. It chokes me up just to say that. Pediatric cancer research is making a difference.”

Staubach’s Co-Chair Troy Aikman followed Staubach to the podium sharing his passion for Children’s Cancer Fund as well as the impact of the nonprofit’s fundraising.

“Thanks to the generous support of people like you, Children’s Cancer Fund has donated more than $8 million to support pediatric cancer research in the Dallas area,” said Troy Aikman. “This is something you can be a part of – curing childhood cancer and helping make treatment safer, more effective, and less painful. When Roger invited me to this event 21 years ago, I was blown away. As long as they keep inviting me back, I will be here. A lot of money is being raised for pediatric cancer.”

Gala Co-Chair Hollie Siglin then shared her personal story of her dad collapsing and being hospitalized the morning of the gala. He was diagnosed with stage 4 melanoma a few weeks after Siglin agreed to co-chair the event.

“I almost did not come tonight, but this cause is important so I left my dad’s side to be here and tell you why we need raise money to cure cancer,” said Hollie Siglin.

Siglin’s best friend and Co-Chair Candice Romo took the mic and told the audience that thinking about these children and what they and their families are going through makes her angry.

“I have three boys of my own, and I can’t imagine having to go through all of this,” added Romo. “We must take a stand against this awful disease and invest in cutting edge research to cure kids’ cancer. So tonight, get out your wallets, go big, and make it rain! We are here to cure children’s cancer!”

In addition to Staubach and Aikman, the 30th Annual Fashion Show presented an all-star lineup of celebrities including Dallas Cowboys Starting Quarterback Dak Prescott returned to the runway this year along with Cowboys Cornerback Byron Jones.

“I would not miss this night, and I look forward to participating for years to come,” said Dak Prescott. “This event is about hope and beating cancer.”

Twenty-two children ages 5 to 15, matched with celebrity escorts, lit up the runway in their fashions provided by Dillard’s for a star-studded fashion show, coordinated by RSC Show Productions. Backstage was a flurry of activity of kids, clowns, magicians, and fun and autographs with celebrities along with primping for the show with, makeup, nails, and hairstyles by longtime Children’s Cancer Fund supporters Salon Pompeo.