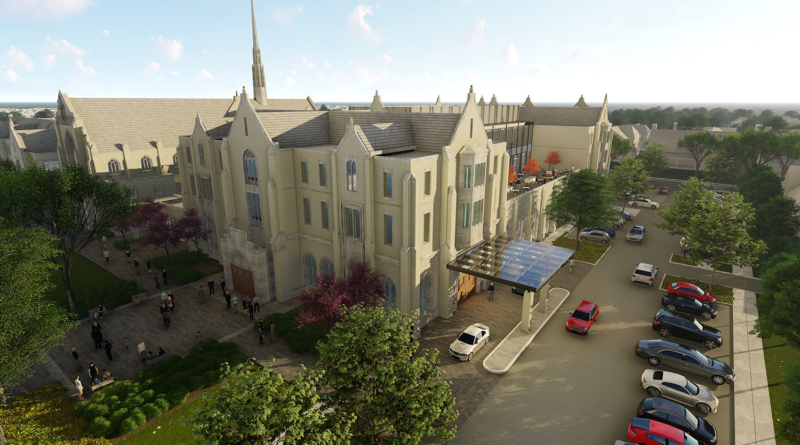 If you missed Tuesday’s University Park city council meeting, you missed two of the liveliest discussions so far this year: the controversial placement of an AT&T cellular antenna on a neighborhood water tower and  Highland Park Presbyterian Church’s plans to demolish one of its newest structures to rebuild it with a parking garage beneath.

Here’s what you need to know:

A homeowner questions the area of growth that’s creating an AT&T coverage gap, saying it’s in the Dallas side, not University Park. “Why are we paying for it?” pic.twitter.com/gRaJ3IJeTO

AT&T representatives plead to the council the need for the additional antenna due to a service gap in the area. Homeowners weren’t buying it. Caroline Goldman, who lives in the 3500 block of Villanova Street, argued to the council that the gap is actually on the Dallas side, not University Park. “Why are we paying for it,” she questioned.

An AT&T representative said there are no other candidate locations for the cellular antennas that would benefit AT&T and UP.

Michelle Chesney, a real estate consultant hired by the neighbors opposing the ordinance, also questioned what the antenna would do to property values in the area. (A survey conducted by the National Institute for Science, Law and Public Policy found that 79 percent of the 1,000 people questioned said they would never purchase a property within a few blocks of a cell tower or antenna).

Chesney said her research shows that home values decrease by 9.5 percent when located near a cell phone antenna. A representative for AT&T, anecdotally, said he’s heard of other research that claims the antennas do not decrease property values, and in some cases increase the value of the homes because many people are going wireless.

While the homeowners asked the council to “pause” before voting and do an independent impact study, they declined. Mayor Oline Lane joked that he’d read more about this issue than he ever wanted.

Steve Mace, communications and marketing director for the city, said the next step would be for AT&T to install the antennas – no street closure is expected. Currently, he said there’d been no word on other providers looking to lease space on the tower.

The cellular towers will generate $45,000 annually for the city.

Highland Park Presbyterian Church – HPPC finally has the approval it needs to draw up a detailed site plan for its demolition and rebuild of the Hunt Building. The win though didn’t come without a few hiccups.

For the past 15 years or so, the church has had a bit of a tit-for-tat with neighbors worried about the growth and how it would impact neighborhood aesthetics and traffic flow. Part of the church’s plan is to build an underground parking lot.

Letters were mailed out to 36 homes within a 200-foot buffer of the church, the city received 20 responses; Five opposed it, and 15 were in favor (however, of the 15 in favor, 13 were from properties owned by the church, according to city records).

UP resident Bob Dill is asking the council to ensure a carport at HPPC does not impeded public right of way. He suggests leaving it where it currently is “it’s not broke, don’t fix it.” pic.twitter.com/UHFqx5hrHS

Bob Dill, who lives about a half block from the church, said 75 neighbors had signed a petition in opposition to the church’s plan.

While neighbors continued to stress some ambiguities with the church’s plans – specifically how long Shannon Lane would have to close during the demolition and reconstruction, a port cohere that would impede right of way on Shannon Lane, would residential homes owned by the church serve as a staging ground, and the need for a traffic management plan – council members, asked few questions and passed the public development district amendment.

Mace, the city’s communication and marketing director, said during the review of the soon-to-be-drafted detailed site plan more of the neighbor’s concerns likely would be answered. For example, the need for a traffic study.

UP Library Gets Social

Child Hit By Car Near Milton and Dickens Ave.