A quartet from ESD used a late surge to win the Freshman Boys Quad race at the recent Stotesbury Cup Regatta in Philadelphia.

The team of Ford Bannister, Sam Lindsey, Sam Curtis, and Christopher Hess claimed the 1,500-meter event in a time of 5 minutes, 34.96 seconds, which was more than a second ahead of the runner-up boat from New York.

The Stotesbury Cup, which is held each spring on the Schuylkill River, is the oldest and largest scholastic regatta in the world. This year, the event included more than 5,000 athletes. 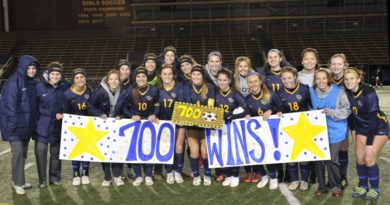