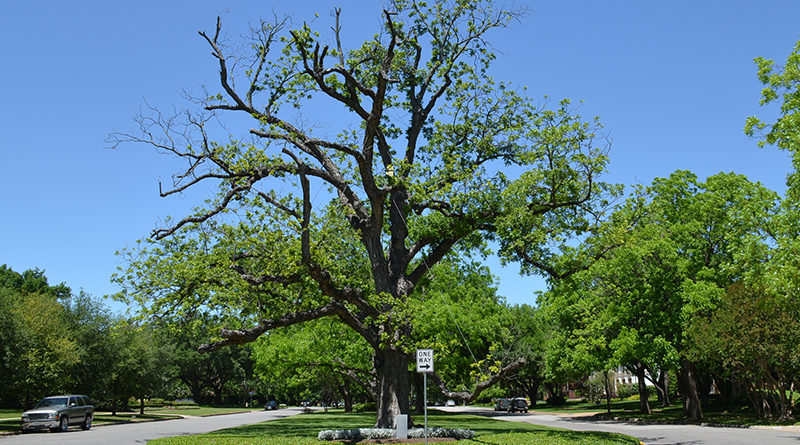 The more than 150-year-old monarch known as “The Big Pecan Tree” has entered irreversible decline, an arborist says.

Micah Pace of Preservation Tree Service expects Highland Park’s 75-foot-tall landmark monarch to continue to develop deadwood, lose canopy, and pose at least some risk to those who pass near it.

“It could persist in that state for decades,” Pace said. “The question is: Is that what we want?”

The choices facing the Town Council start with whether to remove the tree preemptively under controlled conditions or wait and do so in response to some episode such as limb or trunk failure.

Council members haven’t set a timetable for deciding the future of the tree, located in the median of Armstrong Parkway near Preston Road.

Pace said removal should involve a respectful transition process, including a celebration of service for the tree to help residents cope with its loss.

“It’s served the community a longtime,” Pace said. “I’m not trying to sound all green and Californiaish.”

An adjacent large tree, about 100 feet away, is believed by some to be related to the landmark pecan. Pace sees that as a viable “successor” that could be the focus of the annual December tree lighting.

“The problem with the successor: It’s in the wrong place,” Dowler said. The historic pecan sits at an entrance to the town.

“If it does come down, it needs to be replaced with something comparable or better,” Dowler said.

Pace said bringing in an appropriately-sized transplant would cost $200,000.

Dowler suggested doing a fundraising campaign to pay for such a project. It could be a memorial for philanthropist Margaret McDermott, who died in May.

Mayor Margo Goodwin suggested an alternative: converting the area where the monarch stands now into McDermott Plaza or Park, a place where residents could gather to watch the lighting of the other tree.